Russian poet, playwright and novelist Alexander Pushkin described the city of Saint Petersburg as having been created to “cut a window into Europe.” This Thursday night Celtic can bring the shutters down on that window by knocking Zenit out of the Europa League.

This preview of the Round of 32, second-leg tie will use statistics and data visualisation to review what contributed to Celtic’s excellent first-leg performance, and highlight key areas of focus ahead of the return match.

In 2005, Gazprom, a massive Russian natural gas company and one of the main sponsors of the UEFA Champions League, purchased a controlling stake in Zenit St. Petersburg. Since then they have invested heavily in new players and building a new stadium. However, progress has been mixed in terms of its pace both on and off the pitch. The Krestovsky Stadium was finally completed in 2017, ten years after the death of its architect. Although they won the UEFA Cup in the 2007/2008 season, Zenit have finished 3rd in the Russian Premier League in the last two seasons. They exited the Europa League at this point – the Round of 32 stage – last year. That exit was due to a 90th minute away goal by Anderlecht, who finished below Celtic in this year’s Champions League group stage.

Zenit’s financial resources were highlighted by Brendan Rodgers prior to the first-leg tie as reason to consider Celtic as underdogs. This approach has been criticised by some in the media; as has the Russian Premier League’s winter break being cited as a factor due to Zenit’s consequent lack of recent competitive matches. The result is that the tactical and personnel selection element of Celtic’s performance has been somewhat downplayed.

Former Celtic player Davie Provan opined that Brendan Rodgers gave Zenit too much respect by portraying them as the favourites, stating that it was “just as well (Rodgers’) players ignored his pre-match take on the tie.”  While it is a fact that Zenit had not played a competitive match since the 11th of December 2017 – and this can be considered to have played some part in Celtic’s victory, it is clearly wrong to think that Rodgers deserves anything other than fulsome praise for the approach which led to the Glasgow club’s first non-qualifying-round win at home in Europe since 2014.

Celtic lined up in a 3-5-1-1 formation which @11tegen11 has visualised below with a position and passing network diagram.

Key features of the tactical strategy included the tidy industry of the wing backs Kieran Tierney and James Forrest; the positional awareness of Callum McGregor; the smart, deep link up play of Moussa Dembélé; and finally the brave, energetic pressing by McGregor, Dembélé, Olivier Ntcham and Eboue Kouassi. The off-the-ball movement of McGregor and Dembélé, along with the opportunity this formation gave for Tierney to run with the ball high up the left wing, helped Celtic to avoid the stale, slow, U-shaped passing pattern they have fallen into at times lately.

Another Russian literary great, Fyodor Dostoyevsky, was writing about the city of Saint Petersburg when he said; “It was a marvellous night, the sort of night one only experiences when one is young.” This youthful Celtic team could be forgiven for believing this to be a comment on its first-leg victory against a team from the same city.

Some of Rodgers’ team selection was enforced by injury to regular starters, but he was quick to pay tribute to the maturity of his younger players. The fact that over half of the 13 players who featured for Celtic were aged under 23 certainly contributed to the team’s ability to press aggressively and play on the front foot with such energy.

McGregor’s incredible breakthrough goal was set up by one of those young players, 21-year-old substitute Charly Musonda. The calmness in possession and eye for a killer pass which he showed in the 78th minute are foreshadowed in his output (admittedly over limited playing time) for Real Betis last season.

Celtic fans should be encouraged by the fact that he has had very consistent year-on-year numbers in terms of ball retention and successful dribbles. The hope should be that as he matures he shows an ability to sustain his growing Key Pass and xG Chain outputs over the course of a season. 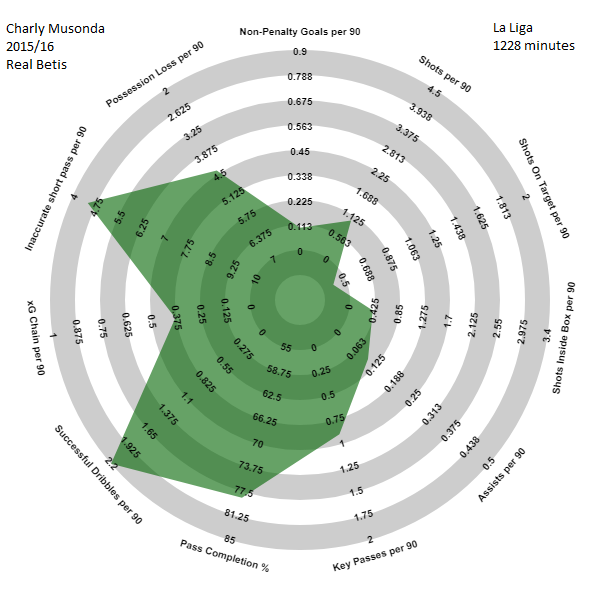 Despite their strong first-leg performance, there are threats which Celtic will have to be aware of on Thursday night. Zenit’s experienced left back Domenico Criscito has a creditable 1.50 Key Passes per 90 minutes in all competitions this season. Indeed, he helped to set up a great opportunity for Anton Zobolotny in the 13th minute against Celtic. This chance came as a result of James Forrest losing the ball from the diagonal kick to the wing back position which Rodgers seems to like his goalkeeper to make. This method of goalkeeper distribution has been a risky one for Celtic in European competition, and is particularly difficult given the lack of a passing outlet directly up the wing for the ball recipient in a 3-5-1-1. While passing completion % is an understandably much maligned statistic, the 71% Dorus de Vries achieved in the first leg is quite low and and Celtic’s team as a whole should be working to ensure they do not lose the ball in dangerous areas to Criscito.

Two more of Zenit’s most dangerous players were relatively ineffective in Glasgow but have the ability to turn the tie around for their team. Leandro Paredes has provided 22 Key Passes from set pieces in 19 domestic matches this season and has taken an average of 2.5 shots per 90 minutes both domestically and in the Europa League. Celtic must limit the free kicks they give away and again occupy his space well in order to influence him into continuing his trend of taking the vast majority of those shots, over 2 per 90 minutes, from outside the penalty area where conversion is much less likely.

The main goal threat comes from Aleksandr Kokorin who is the Russian Premier League’s top scorer with 10 goals. Based on my review of his output and expected performance, his scoring rate is sustainable. But in general terms, when considered against forwards throughout Europe’s elite leagues, Kokorin is average, at best.  He is comfortable all across the front line and Celtic must keep an eye on his movement in an effort to prevent chances falling to him.

In addition to maintaining a focus on these three key opposing players, Celtic should be attempting to create some chances of their own in the return leg. Much has been made of the fact that Zenit were top scorers across all the teams in this season’s Europa League group stage. However, the Russians didn’t keep a clean sheet in any of their home games.

Even FK Vardar Skopje of Macedonia, who conceded five at home to Roberto Mancini’s side, managed to score in St. Petersburg. This should be of equal importance to Zenit’s previous scoring prowess in Brendan Rodgers’ thoughts;  since an away goal for Celtic would leave Zenit needing three goals to progress.

The key to progression

There are three key players within the Celtic team who I believe can improve upon their performance in the first leg. They should look to do so in order to create more chances and possibly deliver an all-important away goal.

Moussa Dembélé was selfless in contributing good off-the-ball movement and deep link-up play. However, only nine of his forty-nine touches were in the Zenit penalty area and he did not attempt a single shot. Given that he took 2.7 shots from inside the opposition penalty area per 90 minutes in this season’s Champions League, it has to be hoped that he can balance the selflessness with some selfishness when there is an opportunity to do so.

Olivier Ntcham occupied space well and was heavily involved, making the most touches of any player, but he was wasteful at times. He failed to hit the target with any of his four shots and nor was he able to find a Celtic player with 63% of his corners. The young Frenchman has the second highest xG Chain per 90 minutes among Celtic players in the SPFL this season so has certainly shown he can make a positive contribution domestically. This could be his time to shine on the European stage.

Finally, Kristoffer Ajer’s game-changing dribbling ability was highlighted in an excellent article by Alex Lawrence (@TheTenSpace) recently. In Glasgow, one of Ajer’s three attempted dribbles was high up the pitch and led to a loss of possession. But if he is encouraged to be brave and positive in the second leg he could prove to be a surprise source of chance creation for Celtic.

Brendan Rodgers rested a number of key players for the SPFL match against St.Johnstone which preceded this vital second-leg tie. While he does often like to spring a surprise, this suggests he may be considering a fairly similar approach in Russia to the one which was so effective in Glasgow. Given the energy and maturity shown by his young stars in the first-leg (with an average outfield age of just twenty-three), it would be difficult to consider Rodgers’ men as outsiders to progress anymore.

Unlike Zenit, Celtic’s zenith in this competition may be yet to come.