Ten-man Hibs took another step closer to winning the Development League with a hard-fought draw against Celtic at Cappielow on Monday. Dundee beat Hamilton in a later kick off to close the gap at the top to just one point with three matches remaining.

We see this all the time; ten-man team does this, that or the other. Usually after having had a man sent off well into proceedings. However, this truly was a ten-man Hibs after defender Sean Mackie was given his marching orders after just three minutes. He could have few complaints. It was the archetypal tackle from behind; long since outlawed.

The Hibees coped admirably though and the sizeable crowd from Edinburgh greeted the full-time whistle with cheers. They knew how important this point – gained under testing circumstances, could prove in the final reckoning.

Hibs had started the brighter of the two sides, but were rocked by that early dismissal. For large parts of the first half Grant Murray’s youngsters were penned in their own half with everyone behind the ball. It worked though as Celtic lacked the quality in the final third to really trouble the Hibs keeper. The young Celts were too prone to taking potshots from outside the box as their frustration showed.

On the rare occasion Hibs managed to break out, Celtic showed some signs of nerves at the back. Midway through the half, Hoops ‘keeper Ryan Mullen elected to head clear when he could have caught the ball. It would have been incredibly harsh for the ref to deem a Celtic defender’s sliced clearance a back-pass. The resultant in-swinging corner clipped the bar on its way to safety, but it was a warning for the Hoops.

Celtic picked it up again and finished the half strongly. They were beginning to get some joy from wide areas, but the final cross or pass too often just didn’t find a target. On the one occasion it did, Leo Mazis could only fire over.

As the teams emerged for the second half at a bitterly cold Cappielow, it was all set for more of the same. However, 8 minutes after the restart, some sloppy play from Celtic in midfield allowed the excellent Fraser Murray to close down and put in an effective block tackle that saw the ball rebound into the path of Lewis Allan. The in-form striker still had plenty to do, but was aided by a desperate, if a bit silly, lunge from the covering Celtic defender. When that tackle was missed, Allan was one on one with the keeper and calmly slotted home for his third goal in two games.

Celtic’s need for a breakthrough was now all the more pressing and they had some spells of very good, controlled, possession without finding a cutting edge. The Hoops were patient, however, and continued to pile on the pressure with most of the game being played in Hibs’ half. They threatened from a couple of dangerous free kicks around the box, but again the final delivery was lacking. Celtic had a strong penalty claim with 15 minutes remaining when the ball appeared to bounce up onto a Hibs hand inside the box, but the ref waved play on and Celtic sub Jack Aitchison was booked for his protests.

Undeterred, the Celts kept probing and pushing, and just four minutes later they got their reward. Broque Watson was on hand to slot home Thomas Caffrey’s cut back from the left. It was the first clear-cut chance the Celts had created, and whilst harsh on the ten men of Hibs, it was deserved for the industry shown by the Hoops.

The Hibees had a penalty claim of their own shortly after, but this one was far easier for the ref to ignore. It was more ball-to-hand as a shot was blocked at point blank range.

A share of the spoils was about right in the end, and the two sides resume hostilities again tomorrow (Thursday) with a 12:00pm kick-off in the semi-final of the youth cup. Celtic will have to be better in the final third, and Hibs could do with keeping 11 men on the park, but it should be another highly competitive match. The game is being played at Hibs’ training centre and entrance is free of charge, although donations to the Hibernian Youth Academy are encouraged.

Men of the match

I couldn’t pick one so I picked three to look at for different reasons. Firstly, Celtic goalscorer Broque Watson, a first half substitute when Grant Savoury was forced to come off injured after that red-card tackle by Sean Mackie. Watson took a bit of time to get to grips with the game after coming on with just 9 minutes on the clock. He looked somewhat isolated on the right wing and struggled to have any real impact. His first touch was heavy at times and you could see he wanted to take on his man but perhaps lacked a bit of confidence. 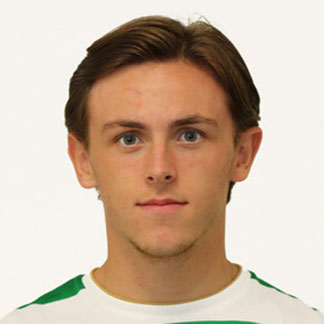 Into the second half and it was a similar story. Celtic boss Tommy McIntyre had an audible conversation with Watson on the far side, calling on him to tuck inside more to give Hibs a problem in midfield and it worked a treat. From there, Watson was able to be in position in the centre of the box to fire home for his goal.

Watson is a rangey winger, and on the basis of this one performance (regular Celtic watchers may tell me different), he looks to be very much a confidence player. He was transformed after his goal. At one point he burst through the Hibs midfield looking like a marauding Georgios Samaras with his shoulder length hair. Kevin Waugh took a booking for his team, otherwise Watson may well have been in for a second. Watson became a driving force in the final ten minutes after spending much of the previous 70 on the periphery. He’ll have better performances, no doubt, but he was the difference between a point and none for Celtic on the day.

For Hibs, the double midfield pivot of Scott Martin and Fraser Murray was as good as any you’d see in the Scottish Premiership. The pair were absolutely immense as they dovetailed nicely to cover every blade of grass in the middle of the park. If Hibs are tempted to cash in on star man John McGinn in the summer – with Celtic the likely destination, Hibs fans needn’t worry. The idea has been mooted on social media that Brendan Rodgers may be willing to part with up to £2 million pounds and throw in Scott Allan as a makeweight. That, to me, would be an outstanding piece of business by the Leith outfit. Yes, they would lose a player of the year candidate in McGinn, but they would gain one of the best playmakers in the division. Allan has been quiet, a lot of that down to circumstance, but when he does play he invariably creates chances for his side. Currently on loan at Hibs from Celtic, you feel there is only one place Allan will be playing his football next season. Whether it’s part of any John McGinn deal remains to be seen.

In any case, the Easter Road production line appears to be churning out plenty of talented replacements. In Scott Martin, (pictured above – credit hibernianfc.co.uk) Neil Lennon has McGinn’s natural successor waiting in the wings. A stocky and bustling presence, he was the destructive force in the Hibs midfield, shutting down Celtic attacks on countless occasions. Along with his sidekick Murray, he was the reason that at times you forgot Hibs only had ten men on the pitch. Martin is currently on loan with League One side Arbroath. At 21, he has played for Hibs in the Championship and also spent a season on loan to Forfar. He needs to be aiming to force his way into Lennon’s thoughts sooner rather than later.

Murray (below, image credit hibernianfc.co.uk) is younger and of slighter build, but what he lacks in physique, he more than makes up for in heart and desire. It looked like he and Martin had an excellent understanding of when to press and when to cover, and between them they didn’t give Celtic’s midfield a minute’s peace. It was from excellent work by Murray that Hibs got their goal, but this boy is about so much more than just snapping into tackles. 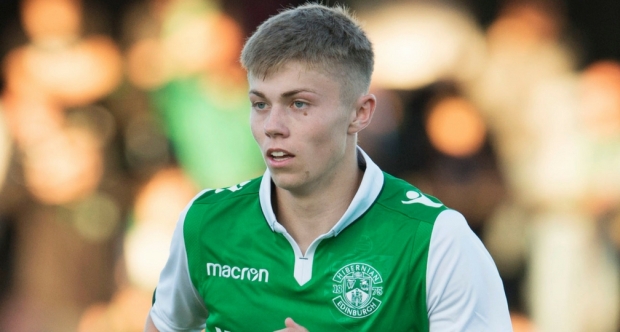 This is a player that knows how to take care of a football. He has a deftness of touch and a football brain that allows him to stay one step ahead of the rest. The 18-year-old made two appearances for the first team in this season’s League Cup group stage, scoring twice. He also has two substitute appearances in the league to his name and is regularly involved with the first team squad.

Neil Lennon has shown there is a clear path for the Hibs youngsters. Ryan Porteous and Oli Shaw have been the beneficiaries this season. I fully expect to see more of Martin and Murray next term. The future appears to be extremely bright at Easter Road on the evidence of these two.