Hibernian’s under-20s rounded off a fine season in style with a victory against Motherwell at Oriam on Monday.

The young Hibees had already been confirmed as the last ever Development League Champions two weeks previously. Ironically, it was city rivals Hearts who ultimately handed Hibs the Championship by defeating their closest rivals Dundee after Grant Murray’s youngsters had won against Aberdeen earlier that day.

The SPFL has confirmed that this will be the last of the youth development league format as it will be replaced by the return of a Reserve league from the start of next season. This is a departure from 20 years of strategy from the powers that be, as there has been a youth league of some description in place of a first-team reserve squad ever since the introduction of the Scottish Premier under-18 league in 1998.

Hibs had come close last season, eventually finishing fourth behind Ross County – managed by the newly installed first-team coaching duo of Stuart Kettlewell and Steven Ferguson. Hamilton Accies and Celtic were second and third respectively. That was the breakthrough season for many of Hibs young stars, however, and a more experienced Development squad emerged this season to take the league by storm, also adding the Scottish Youth Cup for good measure.

It has been a stunning season for the Hibees, with many of their players already having tasted first-team action under Neil Lennon. The ex-Celtic and Bolton Wanderers manager was once again in attendance to watch the youngsters collect their trophy yesterday. There is clearly a well-trodden pathway available to these players should they continue to show the ability and attitude to take it.

They may not be household names just yet, but you will soon be hearing much more from the likes of Ben Stirling, Callum Donaldson, Innes Murray, Lewis Allan and Sean Mackie.

Oli Shaw, Ryan Porteous, Fraser Murray and Scott Martin already have significant first team experience between them. Martin, who wasn’t in the squad yesterday, was recently named Arbroath’s young player of the year in League One. The Red Lichties will need him to continue that form this week as they take on Dumbarton over two legs in the Championship play-off semi-final. Shaw and Porteous are now just as accustomed to being in the first-team squad on matchday as they are to being with their under-20s teammates.

Hibs tied up the Development League and Scottish Youth Cup double thanks to an unbeaten run of eight games to end the season on the ultimate high. Pure Fitbaw had highlighted Fraser Murray and Scott Martin as the standout performers in one particular match that would prove pivotal to the season’s success story. It was a hard-earned 1-1 draw against Celtic at Cappielow, despite playing well over 80 minutes with just ten-men. That result kept Hibs a point ahead of Dundee at the time and allowed them to continue their momentum into the home stretch. You can read the full match report here.

But back to yesterday’s match against Motherwell, and it was a bit of a sluggish start from the home side who were going through the motions early in the match. Stephen Craigan’s young Well side were allowed plenty of possession early on without creating too many chances.

However, a wicked free-kick delivery from Fraser Murray on 25 minutes saw the unfortunate Shaun Bowers put through his own net. Motherwell were rocked and Hibs had their swagger back as they began to assert their dominance and stretch their legs.

Josh Campbell’s strike made it 2-0 to the Hibees and Kevin Waugh rose unmarked at the back post to head home a third goal before half time (all three goals having been assisted by Fraser Murray).

On a gloriously sunny spring afternoon on Oriam’s carpet of an outdoor grass pitch, Hibs came out for the second half and quickly added a fourth goal to put the game beyond the visitors’ reach. It was also the pick of the bunch. Sean Mackie, who I hadn’t seen while watching Hibs against Celtic at Cappielow due to him getting sent off after just 3 minutes of that match, showed exactly what I had missed! An excellent all-round performance was capped by an outstanding goal which saw the left-back run from his own half, slaloming past several despairing Well challenges before expertly curling a right-footed finish past Peter Morrison in the visitors’ goal.

Sean Mackie on another marauding run from left back before scoring Hibs’ fourth and without doubt the goal of the match.

To their credit, Motherwell never stopped fighting and were rewarded with some consolation through goals from Kyle MacDonald and Jamie Semple. There was no way Hibs’ party was going to be ruined though, and the next generation of Easter Road stars held out for a comfortable win before lifting the league trophy. It was a thoroughly enjoyable match and a fitting way to end a superb season for this crop of immensely talented youngsters. Some of them may become first team regulars sooner rather than later if Hibs struggle to hold on to the McGinns and McGeouchs of this world. Hibs fans needn’t be worried – the future is bright. 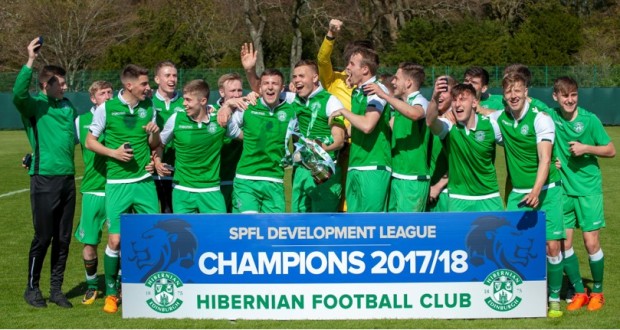 Massive thanks to Calum Mackenzie (@hmfcalum) for the photos.

Additional information was taken from this special commemorative programme produced by Maurice Dougan on behalf of Hibernian Youth Development.