The story of Alex McLeish’s son turning to him one day and pleading for him to sign this young Argentinian starlet for Rangers has been recalled a fair few times over the years. Jon had spotted this player standing out in Barcelona’s youth side on Football Manager. Some tiny kid by the name of Lionel Messi? Heard of him?

For every Messi, there’s been a Freddy Adu. For every Neymar, there’s been a Kerlon. Football Manager prides itself on unearthing talent across the globe, but in a reflection of real life, not all highly rated players go on to do what’s expected of them.

Not since Mark Kerr in Championship Manager 01/02 has Scotland been blessed with any genuine wonderkids on this game so many of us love. He hasn’t quite scaled the heights of his fame that game brought him, winning numerous Champions League winners medals with Europe’s elite, but he has gone on to forge a decent career for himself, currently seen marshaling Ayr’s midfield. But we have had some promising prospects appear over the years. PureFitbaw have asked me to jump into my FM time machine and take a look at how some of Scotland’s talented prospects have fared in the five years since FM13.

The 2012/13 season is where FM13 begins and Dylan McGeouch has just come off the back of what could be described as his breakthrough season for Celtic. He appeared eight times for the club over the course of the season, scoring his first goal with a jinking run from his own half and tidy finish. That goal likely led to his dribbling attribute being so high, along with his flair and technique. McGeouch followed up his debut season with another 15 appearances, although most of them came as a sub. He ultimately was unable to make the breakthrough to regular first team football and joined Hibs on loan, eventually moving permanently in 2015.

And that’s where he is now too. Five years down the line on FM18 and McGeouch doesn’t look as though he’s majorly changed, or progressed, much as a player on the game. There’s a few obvious exclusions, one being his passing has improved over the years, which I think Hibs fans will be pleased to see and agree with. FM also introduced the vision attribute to replace creativity in the time since FM13, and McGeouch has 14 out of 20 for it. Both his dribbling and finishing attributes have taken hits, dropping to 13 and 10, respectively. It’ll be interesting to see how he’s rated on FM19 after what’s been regarded as his best season to date coupled with that Scotland call up last month.

Five days after the release of FM13, Tony Watt came off the bench to make his Champions League debut and cemented a place for himself in Celtic history by scoring the second goal in a 2-1 win against Barcelona. The Football Manager researchers likely rejoiced, as it looked as though they’d got it right with this one. At 18, Watt was very highly rated in the game and had all the attributes to develop into a top class striker. Finishing, quick and good off the ball movement, with the potential to improve his composure and first touch.

Five years later, and Watt has become somewhat of a nomadic front man. A few fleeting spells in Belgium, with his latest one ending in him currently being a free agent. Remarkably, he received a call up and earned his first Scotland cap as recently as 2016 but as he approaches 200 senior appearances, he has just over 40 goals. He still has some eye-catching attributes on Football Manager, with researchers rating his dribbling, off the ball and technique, with his penchant for the unexpected reflected in his flair rating. He’s not the out and out striker that he could have been moulded into on FM13, with his finishing attribute taking a big hit. Will he be able to resurrect his promising career this summer? 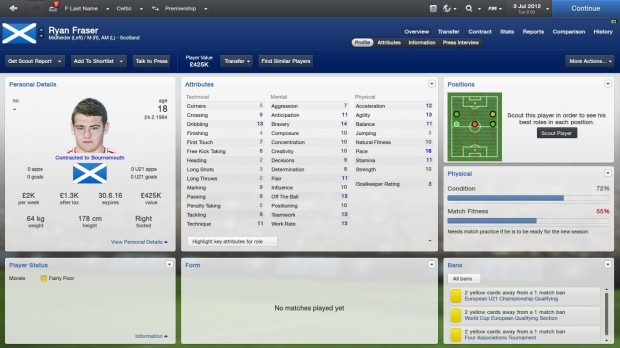 A pacy wide man, tricky and hard working with plenty of room to improve further. Ryan Fraser is about to have his breakthrough season at Aberdeen as FM13 begins. Well, breakthrough half season I should say. After making 18 appearances, he signed a deal with Bournemouth in January after rejecting a new contract with the Dons.

Fast forward five years and he’s progressed from League One to the Premier League with the south coast club. Fraser’s overall game has developed, and his value has certainly sky-rocketed. He’s certainly still a pacy wide man though. If you were managing him on the game, you’d probably like to see his crossing, dribbling and mental attributes improve if he’s to become your star winger in the Premier League. If you managed to prize him away from Bournemouth back to Scotland, he’d be a stand out. Affected by Gordon Strachan’s affliction to those that are genetically underdeveloped, he should turn into a mainstay in McLeish’s Scotland side now.

McGinn is a promising young prospect as 2012/13 kicks off on FM13. He’s just about to have his breakthrough season for St Mirren, and if you’d taken over a Scottish club with more resources available to you on the game, McGinn would be one to snap up and develop into a classy midfield man. Hard-working, with good passing technique and dribbling ability, he can be moulded into your main central creative maestro. Perhaps ending up looking like this…

His game has gone to the next level since making the move to Hibs. He’s a Championship Player of the Year winner and now a potential PFA Player of the Year winner too. He regularly makes Scotland squads and is constantly mentioned as being a successor in the midfield to Scott Brown at both international and club level. Right now, they’re different players. Both hard-working and strong in the tackle, but McGinn is arguably at his best when driving forward with the ball at his feet. He’s got the passing ability and vision to pick a pass too. One more positive season at Hibs and he’ll have a whole host of suitors knocking on his door.

Rewind five years and Islam Feruz is one of the most promising youngsters in Scottish football. The late, great, Tommy Burns campaigned for Feruz and his family to stay in the country after being threatened with deportation. He rejected a professional contract at Celtic to move down to Chelsea in 2011. As just a 16-year-old on FM13, he’s got bags of room to improve but is already quick and has the composure to finish chances.

We know that not everything works out the way it was hoped. Numerous disastrous loan spells later, Feruz is somehow still under contract at Chelsea five years later. Leaving clubs just days into spells after being homesick, fall-outs with managers, unprofessional behaviour towards clubs on social media and various other issues off the pitch have led his attitude to be severely questioned. Can Feruz still make a career for himself in football?

Another very promising 16-year-old at the start of FM13, and the first player of a Dundee United double header. The Arabs were one of the standout teams for players to start a save with around FM13 and for a few years afterwards because of players like John Souttar. He had the ability to develop into a brilliant central defender, but not just in the traditional sense. His passing ability is rare amongst defenders, especially in Scotland.

In the years since, Souttar has of course made the move to Hearts and he’s come on leaps and bounds as a player. He’s still one of my personal go-to attempted signings whenever I’m playing as a side that’ll be able to afford him. There’s been significant gains across the board in his attributes, most notably his strength has improved from five to 13. His position has also changed. Still more than comfortable playing at the back, but he could certainly be utilised in a midfield position with some of his attributes too. A silky deep lying playmaker anyone?

Part two of the Dundee United duo is Mini Messi himself. Ryan Gauld is just about to have his breakout season for the Tannadice side as FM13 began, after making his debut in the last match of the season previous. Again, just 16-years-old in-game, he already has so many standout attributes. He can dribble, can do the unexpected and is hard working, it’s little wonder where those Messi comparisons in the media came from.

After a starring role for the Arabs in the 2013/14 season, Gauld made the ambitious move to Portugal and Sporting. It’s been four seasons now of mainly appearing for Sporting B alongside a couple of loan moves, including one this season to Aves in the top tier. His overall ability has certainly developed positively during his spell abroad, but we’re constantly reading pieces questioning what’s happened to him. I’d personally love him to come home and play a starring role in our league.

Did you know that just five years ago Andy Robertson was playing for Queen’s Park? You did? Ah good.

If you’d come across this 18-year-old left back on FM13, you’d probably pass. He’d certainly make a good attacking option on the left side for a lower league Scottish side, with decent attributes for crossing and dribbling. He certainly doesn’t look like a player that five years down the line will turn into this.

Who saw this one coming? Incredible improvement across the board in Robertson’s attributes. He’s now widely regarded as the best current Scottish player, and will more than likely be playing in the Champions League final this season. The rise he’s had has been phenomenal to follow and watch, and he comes across as a brilliant person as well as being a brilliant footballer. It’ll be interesting to see where he improves on FM19 after the season he’s had.