June 23, 2018
Written by Greg Gordon for Pure Fitbaw.
Just one week into the Finals tournament and Russia 2018 has already become The Setpiece World Cup. Freekicks, corners and VAR-assisted penalties are overshadowing goals from open play in a competition made overly evenly balanced by the intervention of the officials in the video control room.
With all 32 teams having now played their first games and Australia having drawn with Denmark 1-1, after a controversial VAR-assisted spot kick equaliser, the pattern is clear.
Penalties, free kicks and corner kicks have led to more than half of the goals scored so far. That’s 24 of the 47 goals scored in Russia after 21 of 64 games played by mid-afternoon Thursday 21st June. The 51 percent figure is more than twice the 22 percent total of setpiece goals from Brazil 2014, a tournament that saw 38 of the 171 goals emanate from dead-ball situations. There were just 13 penalties awarded during the whole 2014 World Cup tournament in Brazil, excluding penalty shootouts. One week in, there have already been 11 spot-kicks awarded in Russia. 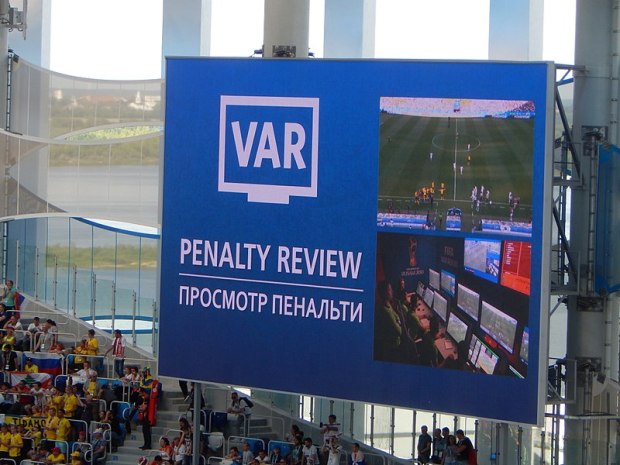 VAR Penalty Review on the big screen at World Cup 2018

VAR has vastly increased the number of spot kicks because more infringements are being seen than ever before – and perhaps more are now being awarded than actually exist in reality. It is safe to say that the Video Assistant Referee (VAR) system, which is making its World Cup debut, has been the most significant ‘player’ in terms of effecting results in Russia. VAR is winning all sorts of awards for assists so far. It is almost inevitable that setpieces should be the name of the game at this World Cup because most teams lack the guile, bravery in possession and cohesion to score in open play. And because most teams drop off and don’t press high near the opponents goal, the tempo, that is set by the team without the ball, is typically slower than we’re used to in elite club football. In addition, the existence of VAR leads to more setpiece situations and therefore less coaching focus on open play.
VAR’s widespread adoption, it seems to me, could fundamentally alter the character of the game we know and love, turning it in time, into a game of territory and position where engineering favourable VAR adjudications through intense penalty box pressure, following setpieces, becomes a legitimate tactic. As we saw with the award of Australia’s game-defining penalty v Denmark yesterday, the problem with VAR is that every challenge slowed down looks like a foul. And every marginal call looks definitive – whether or not it is in real time. Slow motion makes everything look deliberate and premeditated. And VAR is literally reflecting an alternate reality, a reality likely to penalise defenders.
Denmark’s Christian Eriksen said that the penalty awarded to Australia in their 1-1 draw as ‘lucky’, after the video assistant referee system intervened in their Group C clash in Samara. Yussuf Poulsen was penalised for handling the ball in the area as he challenged for a cross, and while the Australian protests were initially brushed aside, the Spanish refereee Antonio Mateu Lahoz was advised to check the pitch-side screen. Mile Jedinak converted the resultant spot-kick, equalising Eriksen’s goal in the opening stages which Denmark had dominated. Thereafter the balance of power switched on the field, underlining the game-defining impact of VAR, when applied. Denmark’s Christian Eriksen said: “There is a handball in the penalty area, but it’s not really an unnatural situation. If you go in for a duel of course you’re going to use your hands to jump. But the decision has to be correct — maybe it’s too correct.”
But how many times has a key decision been rejected and overruled by a ref at the World Cup 2018 after a VAR review? That is a question I’d love to know the answer to once the tournament wrap-up is complete. Almost as soon as a review has been called it feels implicit that the onus is on the referee to make an award in line with the slow-mo VAR perception. 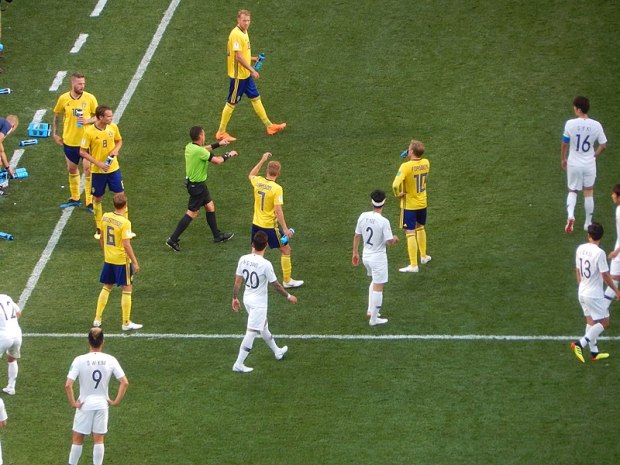 ‘So what?’ you might say. Surely ‘flawed fairness’ is better than relying on ‘biased perception’ in real time.
Maybe. However, I actually think this innovation could set football back 30 years aesthetically, because there is a price to pay for the implied consistency of VAR. Underdog teams in particular will create a war of attrition and look to create potential VAR situations from setpiece delivery, where they can load the box and apply pressure. Japan’s 2-1 win over Colombia Tuesday could serve as a blueprint for ‘weak’ teams under present tournament conditions. The Asian Confederation side scored from a penalty and following a corner-kick against the South Americans who’s 10-men had equalised via a free kick.
The football analytics website Statsbomb confim that when it came to England’s attacking contribution in a 2-1 win over Tunisia in their group opener: “over 72% of their 18 shots came from dead ball situations.” They said: “With the lack of time available for international sides to create the level of sophistication from open play that we see during the domestic football season, one of the best ways to get ahead of the game in international football is dedicating time to developing set piece routines. It seemed clear that Gareth Southgate went over specific corner kick movements which paid huge dividends.”
The number of three free kick goals at Brazil 2018 has already been surpassed in Russia as Portugal’s Cristiano Ronaldo, Alexander Golovin of Russia, Serbia’s Aleksandar Kolarov and Juan Quintero of Colombia have all converted the sympathetically deviating Adidas Telstar 18 used for this World Cup from direct free kicks. The debut of the video assistant referee (VAR) in Russia, has seen three of the 11 penalties so far awarded after a video reappraisal.

All of the minnows, with Iran most notable amongst them, have been able to bridge the gulf in quality, to one extent or another, by winning or conceding tactical fouls. That is free kicks for and against that either buy them time or give them uncontested possession that relieves pressure.
“We are working on these elements in training,” said Croatia’s Luka Modric, who converted one of the penalties after an own goal following a corner gave his side an opening 2-0 win over Nigeria. Modric’s coach Zlatko Dalic concurs, saying: “Corners and penalties are important elements of football. It doesn’t matter how you score – what counts is that you score.”
FIFA confirmed in a statement on Wednesday that it was “extremely satisfied” with the quality of refereeing at the World Cup. They said that the introduction of Video Assistant Referees (VAR) has been a success.
“FIFA is extremely satisfied with the level of refereeing to date and the successful implementation of the VAR system, which on the whole has been positively accepted and appreciated within our football community,” the organisation said. “It is acknowledged that there will still be discussion and divided opinion surrounding certain decisions and we appreciate [the] understanding that it is not possible for FIFA to comment on each and every situation.”
The introduction of the video review for Russia 2018 has coincided with a greater number of penalties being awarded. Through the first week of the competition, 10 penalties had been given, matching the total for the entire group stage in 2014.
But the football community remains divided. Among a number of high profile criticisms was Brazilian confusion regarding Switzerland’s goal in a 1-1 draw being allowed to stand and English concern that contact by Tunisia defenders on Harry Kane at set pieces did not earn a penalty in their group opening 2-1 win. Egyptian Football Association President Hani Abo Rida has blamed Egypt’s early World Cup exit on The Pharoah’s lack of experience, adding that the VAR technology penalised them against Russia. President Rida said that Egyptian defender Ahmed Fathi was fouled while attempting to clear his lines, causing the ball to deflect off him and into his own net to give Russia the lead in a 3-1 defeat. The North African team also claim harsh challenges by Russian defenders in the area should have earned them more than the one penalty kick they converted.
Clearly though, coaches and players are already seeing VAR at Russia 2018 as an opportunity more than a threat. 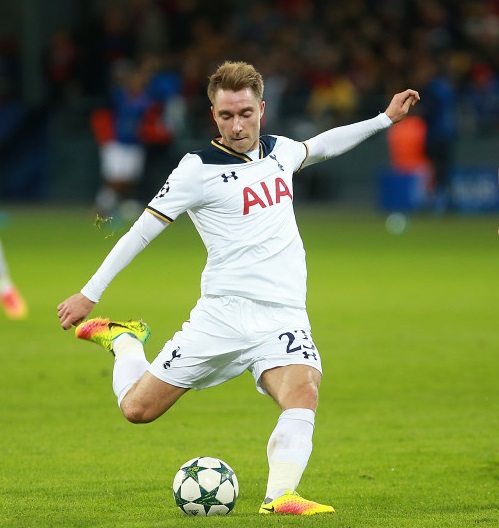 Summing up what is likely the dominant mood amongst those in attendance in Russia, Denmark’s Christian Eriksen said: “Every game is so tough and so tight. There are possibilities at both ends, and with VAR there’s always extra possibility to get something.”
‘Possibility’ is all well and good of course, but with VAR, as it has played out in Russia 2018 so far, there is a clear opportunity cost. We can’t have VAR’s illusion of scrupulously applied fairness without risking a radical return to football’s dark ages, in terms of style of play. Back in the 1980s as boss of Wimbledon’s infamous FA Cup-winning Crazy Gang, Dave Basset insisted that his sides registered at least 18 shots, 12 corners and 12 long throws each game. He did so, based on the principle that the weight of numbers would likely work in his men’s favour if they followed his instruction. The spectacle was brutal, the football attritional, and when it dissipated, thanks to the Champions League, the impact of Sir Alex Ferguson, Ruud Gullit and Arsene Wenger in the 1992-formed Premier League, and the Bosman ruling’s fall-out, it was not lamented.
I’d hate to see the long ball game’s cynicism reinvented in the guise of a minnow’s charter, a levelling down, facilitated by a wider adoption of a well-meaning but flawed technical innovation like VAR.