As we reach the semi-final stage of the brilliant 2018 World Cup here are three hot takes; Belgium’s defence is too old, Romelu Lukaku can outscore Harry Kane in the 2018/19 English Premier League and the deep lying midfield playmaker is dead but Luka Modric can have one (or two) last hurrahs.

Squad Age Doesn’t Matter, Positional Zone Age Does aka Belgium Will Lose Because Their Defence Is Too Old

Age matters in football. Sure, there are high performing outliers heading in to their mid 30s like Cristiano Ronaldo, powering his way to a Champions League threepeat, and Kris Boyd, top scorer here in the SPFL Premiership in 2017/18 under Steve Clarke’s tutelage. Maybe they share the same nutritionist and work out plan? In general though players reach a peak and then decline much earlier than those two fine specimens.

There’s plenty of good work out there about World Cup squad ages and the optimum average squad age based on past results. There are some clear issues with some of those pieces of work; for instance average squad age can be significantly impacted by players within the squad who won’t actually play much or at all. There could be two 40 year old goalkeepers who will never be used ahead of the 30 year old starter unless he is injured or there could be a clutch of teenage forwards who may get some minutes towards the end of matches but no significant game time. Many of the individuals researching average age have of course adjusted for this – calculating averages for just starting 11s or weighting results by minutes played.

In my view, an even more interesting approach would be to analyse a team’s positional zone average age.

This is what a peak age golden generation looks like #BEL & here’s one a couple of tournaments short of it #FRA #FRABEL #WorldCup semi final 1. data @InfoGolApp pic.twitter.com/UTLBXAiMY4

In Mark Taylor’s tweet above he states that Belgium are ‘peak golden generation’ as so many of their players are in the zone of being aged 24 to 28 with a good amount of international caps. In terms of playing experience I would be more inclined to measure something like minutes played in a ‘top 5 league’ as a reliable indicator rather than caps but if we focus in on age I want to ask that we consider the context of an actual football match. We can see that Belgium’s three starting central defenders – Toby Alderweireld, Jan Vertonghen and Vincent Kompany – are all outwith this peak age zone. Clearly they are very experienced, elite level defenders but, if we are stating that being in the peak age zone is a positive, there must be a risk in having old players filling one positional zone.

Let’s examine briefly a few other 2018 World Cup nations. Brazil had a central defence of 33 year old Thiago Silva and 33 year old Miranda. They were lauded for their ability to block shots in this World Cup but often defenders are praised for their ability to anticipate play and be in the right place precisely so that they don’t have to make heroic last ditch attempts at stopping shots. Up against the intelligent movement of Belgium, and with 33 year old Fernandinho protecting the zone in front of them instead of 26 year old Casemiro, they could no longer keep it up.

Brazil will come at you from all angles, but have they a small weakness at the back? Looks like you can get central shots off against them… pic.twitter.com/L4O6cvZ4wb

Casemiro protects the zone in front of Spain’s 32 year old centre back Sergio Ramos at club level for Real Madrid. Here in the World Cup though Ramos had the declining 29 year old Sergio Busquets in front of him and the 31 year old Gerard Pique alongside him. I had suggested before the tournament that some of Spain’s attacking play could be limited due to selecting older players such as Andres Iniesta and they certainly struggled to create chances in some matches. However, the real positional zone of concern in terms of age turned out to be central defence. Both Pique and Ramos made mistakes and without the balance provided at club level by their young, French partners Samuel Umtiti and Raphael Varane those errors were punished.

There are more examples; Portugal’s central defence of 34 year old Jose Fonte and 35 year old Pepe, Argentina’s midfield of 34 year old Javier Mascherano and 32 year old Lucas Biglia and Germany’s initial midfield double pivot of 31 year old Sami Khedira and 28 year old Toni Kroos. Consider too some nations that failed to even make the World Cup. In Italy’s vital second leg of their qualifying play off with Sweden they chose a central defence consisting of the then 36 year old Andrea Barzagli, 30 year old Leonardo Bonucci and 33 year old Giorgio Chiellini. Sure, all great defenders even into their 30s but they were playing behind a midfield containing 32 year old Marco Parolo and 30 year old Antonio Cnadreva in this tie. The Netherlands are another nation that might have been expected to qualify for the World Cup but it helps us understand why they may have failed if we consider the fact that in one of their key matches, away to France, they started with an attacking midfield zone containing the then 33 year olds Arjen Robben and Wesley Sneijder. In the final match of their World Cup qualifying group, a 3-0 defeat to Brazil, Chile had high positional zone average ages in key spots throughout the team including 32 year old Gonzalo Jara and 30 year old Gary Medel in central defence. 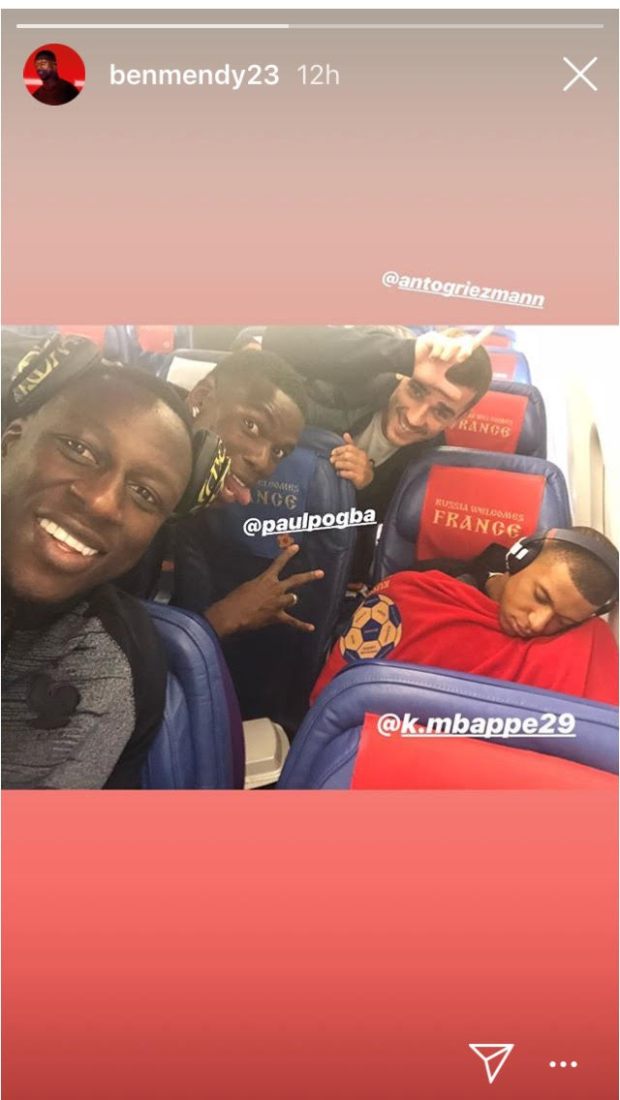 Kylian Mbappe resting up before facing the aging Belgian defence

Didier Deschamps’ use of Olivier Giroud as an attacking spearhead has, given France have progressed this far, worked out quite well but could France exploit the high positional zone average age of Belgium’s central defence by starting the lightening quick Kylian Mbappe as a centre forward and the similarly speedy Ousmane Dembele on the right wing to take advantage of the space behind the wing backs?

I believe that while average squad age work is important the real insight can be found when we think a little more about the actual on pitch context and the central defence position is a risk for Belgium. In the other semi-final Croatia must be wary about starting a midfield double pivot of 32 year old Luka Modric (more on him later) and 30 year old Ivan Rakitic against England’s young and mobile trio which operate ahead of Jordan Henderson and behind, around and beyond centre forward Harry Kane.

Romelu Lukaku is the best centre forward in the world right now and all he needs to be the English Premier League’s top scorer in 2018/19 is for Jose Mourinho to play a system that helps him shoot more often. Sure, Harry Kane is leading the way – courtesy of lucky deflections and boring penalties – to the World Cup Golden Boot and Kylian Mbappe could even steal in, at 100mph, for second spot, but Lukaku has been the striker of the tournament.

Like Kane he has performed as a complete centre forward and has facilitated opportunities for others with his intelligent movement – bodying the racist, deliberately reductive trope of ‘pace and power’ often used by lazy commentators to describe African footballers. He has been a danger on the ball driving from deep, has taken his chances well and has executed tactical ploys, such as playing on the right wing against Brazil, perfectly. 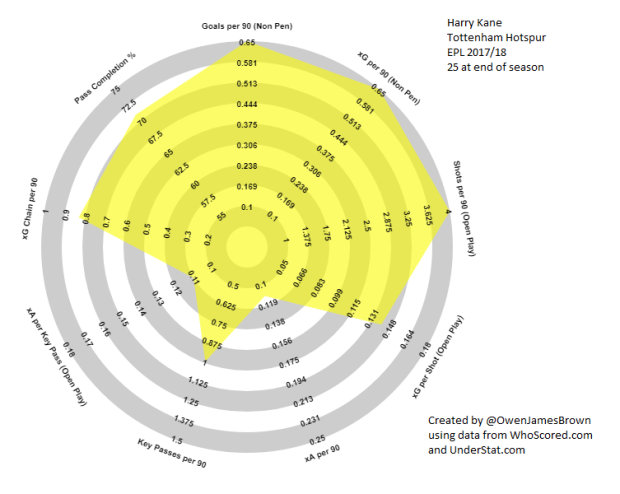 Lukaku performed relatively similarly, in terms of underlying numbers in the 2016/17 season for Everton. He had 0.44 non penalty xG per 90 then compared to 0.46 for Manchester United last season. He took slightly more shots for Everton at 3.03 per 90 in the 2016/17 season. The numbers are pretty clear and simple – Lukaku needs to find a way to move the needle on his shot taking while not sacrificing too much in terms of the location he is taking him from. If he can manage that then we can expect him to produce a goalscoring output much closer to and perhaps in excess of his peers in the 2018/19 season. The introduction of Fred alongside Nemanja Matic in the Manchester United midfield is going to allow Paul Pogba the license to rove and carve out opportunities even more and the possibility of younger full backs such as Diogo Dalot starting will quicken the attack.

At this World Cup Lukaku has, while also showcasing his ability to create chances for others, managed to take slightly more shots than he did in the 2017/18 EPL season. So far from open play he has taken 3 shots per 90 with an impressive 2.8 of those coming from inside the box. In contrast, Kane has taken 2.7 shots from open play per 90 with 1.9 of those shots coming from within the box.

There is of course strong competition, in the form of Kane, Aguero, Salah, Gabriel Jesus, Pierre Emerick-Aubameyang and more but I expect Lukaku to carry his World Cup form and the leadership attributes he has shown for Belgium forward and be the most dangerous striker in the English league this coming season.

Time is up for the deep lying midfield playmaker. In place of considered guardians of possession such as Andrea Pirlo and Xavi we now have 6s like N’Golo Kante, still brilliant on the ball but more focused on destruction of opposition counter attacks and facilitating speedy transitions of their own.

Matuidi (58 pressure events) and Kanté (51) had a lot to do to quieten Peru’s attack, while Pogba (40) and Mbappé (38) supported them on each flank: pic.twitter.com/kKYTH0OFlO

In addition, there are free 8s as used by Manchester City and England, dynamic dribblers such as Naby Keita who are capable of contributing at both ends of the pitch to elite levels and, as written about superbly by Nico Morales, the rise of the central defender as quarter back of sorts.

I got to write about a living God, John Stones, for @ringer . Come check it out https://t.co/1mI5UH9GJP

I do eagerly await John Stones’ performance when pressed by Mbappe with Henderson locked down by Pogba and Kante!

Luka Modric is one of the last great deep lying playmakers currently operating at the top level. He was mainly used in Croatia’s qualification games for the World Cup as a 10 but this has not continued into the tournament. In the quarter final against Russia he started as a part of a midfield double pivot and ended up in an all action role all over the pitch, even in the right back zone at times, making four key passes and playing 76 of his 112 passes forward.

If he can be used as a deep lying playmaker in a central midfield three from the start – so that there is more of a positional zone age balance and with the insurance of a 6 behind him – he could prove to be a match winner for Croatia against England. In the World Cup he has provided 2.5 key passes every 90 minutes while still having a pass completion rate of 86%. The role he might be most effective at playing in this semi-final may seem to be disappearing but there is time for a couple more magnificent performances from Modric before the likes of John Stones are crowned as football’s new playmakers.

My final tip though – just keep him away from penalties – even when he has scored they have not been well taken. Maybe there is something in David Preece’s thoughts about the poor penalty taking of very technically accomplished players!