He’s been booed by pubs full of his own country’s fans, voted by the public as England’s poorest player against Panama despite setting up two of the goals and has faced racist attacks on his character from the English tabloid media throughout the 2018 World Cup.

Raheem Sterling had a brilliant 2017/18 campaign for record breaking English Premier League winners Manchester City in which he scored 17 non penalty goals. He hasn’t been able to replicate that level of goal scoring for England and last scored for his country almost three years ago. He’s missed some chances in the World Cup and there is a perception that he is a poor player or at the very least a poor finisher. Bobby Gardiner wrote a seminal piece about this and Mike L Goodman has added further detail to the argument supporting Sterling.

A message from the fine folks at StatsBomb. Raheem Sterling is good at scoring goals. @TheM_L_G https://t.co/pv7s7LtZTo

Scoring rates change and, while some may say its because of a dip in form or a loss of motivation or that the player really is rubbish at finishing and has been lucky in the past, usually it is because of a change in process. Process affects outcome. Of course, the process could be affected by factors such as a loss of motivation but often there are tactical factors which are the cause. England’s tactics at this World Cup have certainly not led to a huge amount of open play opportunities as GraceOnFootball both points out and also explains that football managers have to remain aware of the fact that attempting to do one thing such as create those opportunities may change the process so that the actual outcome is conceding more goals.

*NEW*
Do England have a problem in open play, and does it matter?
by @GraceOnFootball https://t.co/2fDxEOnUNZ

Alex Stewart  has created an excellent video explainer of Raheem Sterling’s importance to England’s World Cup 2018 system and shows in detail why expecting lots of goals from him is both misguided and a failure to understand what it is he actually does for the team.

It’s important, in my view, when analysing football and particularly when thinking about individual performance to consider the wider context and the impact that even slight changes to the process can have. Changes in outcome are rarely down to, despite the view of some pundits, just giving ‘110%’ but are often due to tweaks to systems as a result of seemingly unrelated events. The difference in England’s system and Sterling’s role within it certainly helps us understand why he is not scoring for them as much as he has done for Manchester City. It is worth also then thinking about why he has scored so much for Manchester City. Let’s start by considering Benjamin Mendy’s knee.

Is it possible that Benjamin Mendy’s cruciate knee injury, sustained against Crystal Palace in September 2017, had a significant effect on two of his young Manchester City teammates; Leroy Sane and Raheem Sterling?  In my view, the injury may have caused a change to Manchester City’s system which led to Sterling scoring more goals than he otherwise would have and has led to unreasonable expectations of him for England at the 2018 World Cup. It also seems possible that, without the change in system, Sane may have learned how to play more of an interior role under Pep Guardiola which may have helped him to get selected for Germany’s 2018 World Cup squad.

Let’s take a look at some Manchester City player heat maps directly before and after the injury.

Above is Manchester City’s 5-0 victory over Liverpool on the 9th of September 2017. We can see how high up Mendy is playing on the left flank. In fact, Manchester City used a form of 3-5-2 in this match and neither Sane or Sterling started. The right hand image is of Sane, once he was introduced as a substitute. It is clear that, although primarily on the left flank he is quite deep at times and also comes to central areas. In his short appearance off the bench Sane scored two goals.

In this image we can again see Mendy (far left heat map) incredibly high on the left flank. In fact, he is higher than Sterling (middle of the three heat maps). Sterling obviously had a very mobile and involved game but there is a clear spot –  very wide on the right flank – which he is most often found in. Finally, when Sane is introduced as a substitute he seems to have moved around a lot and has had touches of the ball on both the left and right in high and deep areas as well as inside the box at the left angle.

Mendy suffered his season ending injury in Manchester City’s next English Premier League match, a 5-0 victory at Selhurst Park, on the 23rd of September 2017. Their following Premier League tie was away to Chelsea and manager Pep Guardiola introduced Fabian Delph in place of the injured Mendy but asked him to play in more of an interior left back/midfielder role. The knock on effect of Mendy no longer being Manchester City’s left back – and subsequently there being less of an opportunity to stretch the opposition’s flank from that position – was that, in my view, Sane was asked to stay higher and wider by Guardiola.

We can see the evidence of that in the heatmaps above from the game against Chelsea. Sane (left heatmap) has a clear position he is maintaining – high and wide on the left wing. It is almost a mirror image of Sterling in the match against Watford. However, Sterling is no longer stuck out on the right wing and is touching the ball most often in areas we might expect to see from someone like Mo Salah – dangerous areas inside the angle of the box. My view is that this change, brought about in part by Mendy’s injury, led to Sane being asked to stay high and wide on the left to stretch play and to Sterling becoming the major goal scoring beneficiary as he was allowed to be the wide attacker who drifted inside and into the box at the back post for opportunities. The heat maps below, of the next match which was a 7-2 win over Stoke, show this continuing.

Finally, in the wake of their Champions League exit to Liverpool, Manchester City traveled to Spurs on the 14th of April 2018. Is there evidence of the change in system still being in effect all those months later?

We can see that Delph (far left heat map), although higher up than we’ve seen him in the past, is still not offering the sort of high, defence stretching width that Mendy would have. Sane (middle heat map) is mainly active on the left flank and has most of his touches in a wide spot. Finally we can see that Sterling (far right heat map) is not constrained to the right flank. He is getting touches in central areas in front of goal and took five shots in this match; the most of any player.

It certainly seems that the injury to Mendy and the loss of the high width he was supposed to provide for Manchester City led Guardiola to use Sane in a more fixed wide role and Sterling in more of an attacking one closer to the opposition goal. Sterling took 0.75 shots per 90 minutes more for Manchester City in 2017/18 than he did in 2016/17 and had an average xG per shot from open play of 0.22 in 2017/18 as opposed to 0.14 in 2016/17 according to UnderStat. In contrast Sane’s average xG per shot from open play in 2016/17 was 0.19 but in 2017/18 it dropped to 0.13. Clearly there has been a change in their underlying numbers and I believe the fact that Sane outperformed his xG and increased his scoring year on year has hidden this somewhat. 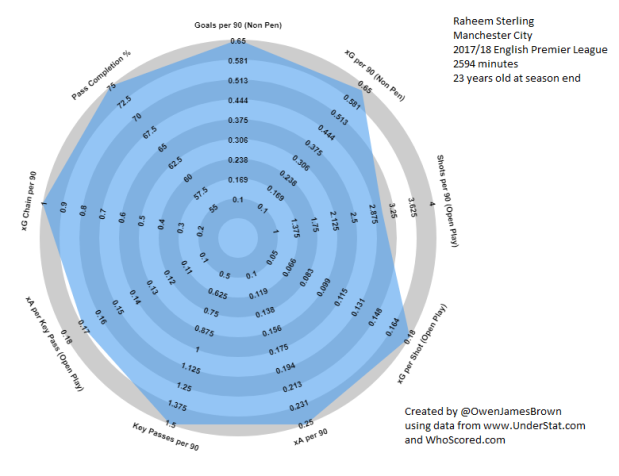 Raheem Sterling has performed excellently for England and may even get a goal in tonight’s semi-final against Croatia, surely tired after two bouts of extra time in their previous ties, but it will be interesting to see what happens to his goalscoring next season for Manchester City when Mendy is likely to start at left back and there will be other wide attackers looking for goals such as new signing Riyad Mahrez.

Harry Kane has all the goals, but Raheem Sterling has been England’s best attacking player in the World Cup. He plays a vital role progressing the ball so Eng can get all those corners and FKs.

He’s also NOT a bad finisher, just a bit unlucky in the WC so far. pic.twitter.com/CFBwjDdeSn

Even if his scoring drops off, and whether you choose to attribute that to him being a bad finisher or unlucky or to a change in process, he is still an incredibly talented young footballer and will still make a big contribution for Manchester City and England in the years ahead. Leroy Sane too can be a very significant player for his club and country. Perhaps in this coming season he will be given more of an opportunity to move inside due to Mendy’s presence and will learn more about that role and develop the attributes Jogi Low felt he was lacking.