On the 17th of July in scorching Skopje Rangers finally made the leap into the second round of the Europa League. It was by no means a classic; a controlled 0-0 draw against the stubborn FK Shkupi who fought hard over a two legged affair but were never clinical or lucky enough to repeat the heroics of Progres Neiderkorn last season. It could perhaps be a defining moment in the post administration Rangers era. After being absent from Europe for so long, they are now up and running again with a knockout tie completed and a second round fixture to look forward to tonight against NK Osijek from Croatia.

Rangers, considering their resources and pedigree, should always be in the mix when the second round of qualifiers get going but fans only have to look back to a year ago to see how badly things could have went. A year on from that disaster in Luxembourg, and Steven Gerrard’s Rangers have started to put things right by getting through another potential banana skin but just how far have Rangers really come since that hellish curtain opener set the tone for another disappointing season?

Staunch At The Back

Something that should show the progression of a team is the ability to retain clean sheets. Last year Rangers conceded two horrendous goals away in Luxembourg but this year they looked solid and composed at the back. The new look defence handled the few threats posed by the Macedonians effectively with Goldson providing excellent cover for Tavernier, Katic and Flanagan looking solid and Alan McGregor providing crucial saves at crucial moments. Although tougher tests will undoubtedly come the way of this new look defence that ability to keep clean sheets will breed confidence throughout the team.

Last year Rangers were a mess at the back and Progres reaped the rewards. They were shaky and unconvincing and that was capitalised on by a weak opposition. It is clear that big steps have been taken with the capture of the new defensive recruits and Rangers will look to continue this solidity into the second round tie tonight.

One thing that was massively lacking last season in Luxembourg was a strong attitude to roll the sleeves up and hold onto the slender lead captured at Ibrox. All across the park, especially in midfield, Rangers players sluggishly crept up to Progres players. They were passive and allowed Progres to get a foothold in the game. Last year Rangers fans could not believe what they were seeing in Luxemborg, to let a team of part timers back in the tie and give up when they did was an astonishing sight for the fans watching. The first two European ties this season have displayed far more grit and determination from Rangers. They are by no means world beaters but Steven Gerrard demands players leave everything on the park, and so far so good in this regard. Rangers matched Shkupi in the heat of the second leg, kept the pressure on, hassled them and forced mistakes which in turn limited the chances or moments that the opposition strived for. 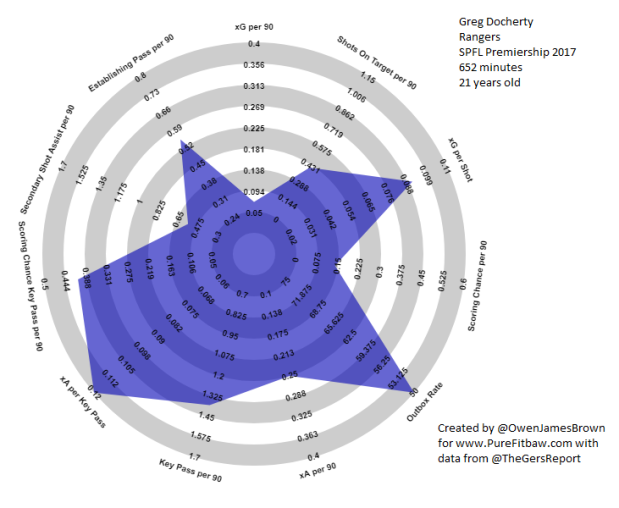 Could Greg Docherty – a loan target for Sunderland – provide the fight Gerrard wants as well more creativity for Gers?

Ross McCorie and Ryan Jack sat in front of the back four and snapped into tackles, Daniel Candieas applied plenty of pressure and hunted Shkupi  players forcing mistakes, with Alfredo Morelos showing real tenacious desire to press the Shkupi defence. Gerrard wants his players to fight and for once there is a consistent pattern to this, which will have to continue into the next round.

Confidence was high before the first leg at Ibrox. The new look, high energy, high pressing Rangers had just dismantled Bury 6-0 only six days before the arrival of Shkupi  in Govan and the hype was building around just how this Rangers side would go about beating the team who finished fourth in the Macedonian league. A sell-out Ibrox greeted the players as fans packed in to give Steven Gerrard a memorable welcome on his first competitive match and there was a sense there would be more of the same from the Bury match. However, the performance over both games against Shkupi will have worried Gerrard and with good reason. Last year Rangers never got through the first round, but if they did they would have had to have been a far lot better in front of goal if their journey was to continue any further. This season is no different, and despite some positives both legs were ultimately disappointing in their lack of substance and style.

The issues are clear to see. Rangers lack a creative spark and they lack someone who will be ruthless in front of goal. In Skopje Josh Windass and Jamie Murphy were tasked with providing creativity and, although there was a much improved performance from Josh Windass, he still lacked a cutting edge and took too many touches at crucial moments. Murphy again caused problems and the lanky winger has it in his locker to be a real threat for Rangers going forward but he drifted in and out of the game in Macedonia.

The issue though for many Rangers fans lies up top as Morelos had a nightmare of a match and looking seriously lacking in confidence. The stats don’t lie; last season’s top scorer hasn’t netted in a competitive outing since April and with a catalogue of sitters missed against Shkupi the lack of ruthlessness up front is clearly concerning Gerrard.

The tie against FK Shkupi will always be remembered as Gerrard’s first big test as Rangers manager and in terms of results he and Rangers have passed. In many ways the catastrophe of last year coupled with the weight of expectation was always going to make this a real obstacle to overcome. Sure, it was tight and a 0-0 draw away from home against a team with no European pedigree is probably not the statement Gerrard was wanting to send to the rest of Europe but it was a glimpse of the foundations that a stronger Rangers could well be on the horizon.

The Gerrard revolution has started from the rear and the missing pieces of the puzzle are now glaringly obvious for the manager and his backroom staff. The lack of fire power will be a concern but Rangers are now a team that fights and a team that look stronger where it matters and in the treacherous waters of preseason European ties the need to remain that way is just as important as the need to be ruthless up the other end.

Rangers have made progress but NK Osijek will be a real test tonight – can they maintain their staunch defending and hard work while being more creative and efficient in front of goal? Let us know your thoughts at Pure Fitbaw.