As Alfie Mawson nears the completion of a £20 million move from Swansea City to Fulham F.C. (what business they’re doing this summer btw – excited to watch Tom Cairney link up with Jean Michaël Seri!) we take a look at central defenders manager Graham Potter could consider as replacements while also further strengthening the Scottish connection at the club. Former Rangers player Barrie McKay is set to join after scoring five goals and making seven assists for Nottingham Forest last season while Oli McBurnie seems likely to lead the line for The Swans after notching 0.60 goals every 90 minutes while on loan at Barnsley and making his international debut for Scotland. In addition to these members of the first team squad Swansea also have a Scottish assistant manager, Billy Reid, and a Scottish Head of Player Recruitment, Kyle Macaulay.

Pure Fitbaw profiles three players with a Scottish connection that Macauley, newphew of former Aberdeen manager Steve Paterson and a former player himself for Alloa Athletic and Elgin City as well as the Dons, could attempt to recruit for the campaign to bounce back from last season’s relegation to the English Championship. 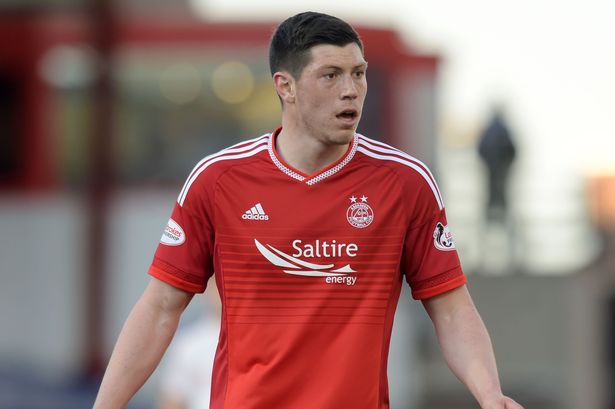 Swansea scouts were apparently in attendance for Aberdeen’s admirable defensive performance against Burnley last week in the Europa League clash. Scott McKenna has been with the Dons since the age of eleven and, after periods out on loan, has made the breakthrough into the first team this season – becoming a mainstay in central defence at just 21 years old. He has had a remarkable season; making his Scotland under-21 debut in September 2017, being the subject of a rejected transfer bid from Hull City in January 2018, debuting for the senior Scotland international team in March 2018 and in that same month signing a new club contract which runs to the summer of 2023.

Aberdeen’s manager Derek McInnes has been bullish in the face of interest – stating when the youngster extended his contract; “I’m looking forward to Scott being part of a strong and successful Aberdeen team going forward.” and slapping a £10 million price tag on his head recently. Aberdeen are right to demand an appropriate fee for the player, particularly given the length of his contract, their own lack of depth in the position and recent loss of other key players such as Kenny McLean and Ryan Christie, but a bid of around half that – which would help finance their new stadium move – would probably be enough to tempt the club to sell. McKenna is tall, powerful, comfortable on the ball and given he is left footed would be an ideal replacement for Mawson.

In the 2017/18 SPFL Premiership, of players aged under 23, Cedric Kipre blocked the most shots and made the most interceptions per 90 minutes. Another young centre back who has had a great debut season in the Scottish top flight Kipre actually one-upped McKenna by extending his contract with his club, Motherwell, twice this season. The Paris born Ivorian signed a one year deal for the Steelmen in July 2017 and by late August the club were so impressed by his performances that they offered him new terms to sign up until the summer of 2019. Kipre continued to impress and he signed another contract with Motherwell in April 2018 which extended his deal to the end of May 2020.

Kipre started his career as a youth at PSG before joining Leicester City four years ago. He didn’t make a senior appearance for either of those clubs and was released by the East Midlands team but he has been an incredibly smart pick up by Motherwell. The 21 year old is 6ft 3 inches tall and has a very broad, solid frame but also has the ability to break the lines and find deep lying forwards or attacking midfielders with good passes. A bid of just £1.5 million might prove too much for Motherwell to resist and, although some Swans fans may be wary due to the player’s red cards in two matches against Celtic, they would be getting an intelligent young defender with a good combination of technical and physical attributes.

Liam Lindsay was relegated from the English Championship last season – which sets immediate alarm bells ringing – but he was actually one of Barnsley’s few positives in a poor season and picked up their Players’ Player of The Year award. It seems as though this wasn’t just a case of being the least bad player out of a bad bunch and he did actually have a good season in some respects and can perform at this level. The 22 year old won 75% of his tackles and 68% of his aerial duels and was considered for a Scotland international call up during the season.

Lindsay reads the game well and, while he does need to work on the accuracy of his passing, does want to build play from the back which would suit Swansea if they are transitioning back to the style of play which served them so well in their previous rise to the top flight. He is contracted until 2020 and Barnsley would be keen for him to stay and help their fight to bounce straight back from League One but an offer in the region of £3.5 million might secure the deal given he only cost around £400,000 a year ago.

Tweet Pure Fitbaw to let us know your thoughts on these players and any other Scottish or SPFL options for Macauley and Swansea to scout. We think they may need a really good forward passer in midfield, some depth at centre forward if Bony and Ayew leave and perhaps a nudge to try McKay as a 10. What do you think?