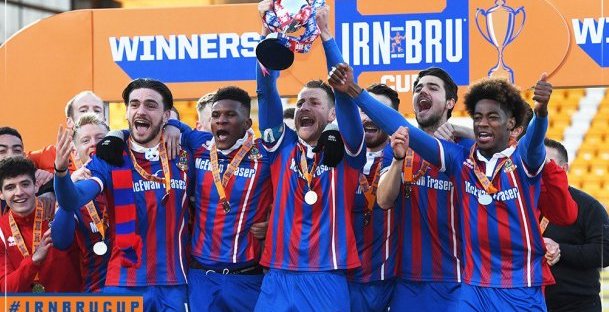 The Irn-Bru Scottish Challenge Cup kicks off tonight with the undoubted tie of the round taking place at the Tulloch Caledonian Stadium between holders Inverness Caledonian Thistle and Dunfermline Athletic.

Split into regional ties, North and South, the first round continues tomorrow night, and across the two evenings the twelve Premiership clubs will also be represented by their colt teams comprised of under-21s.

Pure Fitbaw was at the Peoples’ Palace in Glasgow back in July as Billy Dodds made the draw; and the all-Championship clash between John Robertson’s Caley Thistle and Allan Johnston’s Pars was the one to capture the imagination.

After a topsy-turvy week in the Highland capital, Robertson will be keen to get the focus back on football. The club’s first ever captain, Alan Hercher, passed away recently at the age of just 52. Hercher was appointed skipper after the 1994 merger of Caledonian and Inverness Thistle.

‘Big Herchie’ played 79 times for the club, scoring 23 goals. That included Inverness Caley Thistle’s first hat-trick in the Scottish League during the club’s first home league match – a 5-2 victory over Arbroath at Telford Street Park. Tributes have been flooding in for the man labelled “a truly great Highland footballer” by long-term friend and former teammate, Charlie Christie, who is  currently ICT’s Head of Youth.

At the end of a difficult week for the club, Ayr United were the visitors on Saturday and there was controversy during the 0-0 draw. Caley Thistle midfielder Liam Polworth missed a penalty as the Highlanders failed to capitalise on their numerical advantage with Ian McCall’s side down to ten men.

Polworth’s family, including his partner and sister, who were in the crowd were the subject of verbal abuse from a small minority of home fans. Club Chairman Graham Rae has since issued a statement condemning the fans involved, saying “they have been identified and are in the process of being banned from future matches.”

Rae went on, “we are a family club, where all in the community are welcome, and abuse of anyone – whether they are players, staff or fellow fans – will not be tolerated. Debate around team performance is part of being a supporter, disrespect towards anyone representing our club is not.”

Despite the disappointing goalless draw, Inverness remain unbeaten following their opening day victory away to Falkirk. With the exception of a humbling 5-0 defeat to Hearts at Tynecastle in the Betfred Cup, John Robertson’s side are unbeaten in 18 matches, stretching back to a defeat in March against – Dunfermline.

The Pars fell to a 1-3 home defeat to Caley Thistle’s Highland neighbours Ross County at East End Park on Saturday, their first defeat in six matches this season. Manager Allan Johnston has said that he will be fielding a team of fringe and young players, so that will mean a chance for them to stake a claim for a first-team spot.

Next up for the Pars is a tricky Betfred Cup tie against high-flying Hearts. The Jambos ended Caley Thistle’s League Cup interest with that 5-0 thrashing last month, meaning the Highlanders have a free weekend coming up and can focus on the defence of their Irn-Bru Cup, starting tonight.