Pure Fitbaw spoke to Stuart McCall at the IRN-BRU Cup 2nd Round draw recently and we took the opportunity to ask him about his experiences playing for Scotland and his thoughts about the national team ahead of our fixtures in September.

#Scotland tickets for the #NationsLeague & friendlies are now on sale.

The former midfielder for Bradford City, Rangers and others told us that a favourite memory from his forty Scotland caps was his debut in March 1990 against World Cup holders Argentina. McCall quipped;

“I know Maradona chickened out because he knew I was making my debut. He was all set to come but then heard that this little ginger McCall was playing and he didn’t fancy it. That was the story going round anyway.”

McCall was then selected for Italia 90 just months after his international debut and scored his only Scotland goal in the group stage match against Sweden. We’ve reviewed the goal to understand how this incredible moment came about for the player. 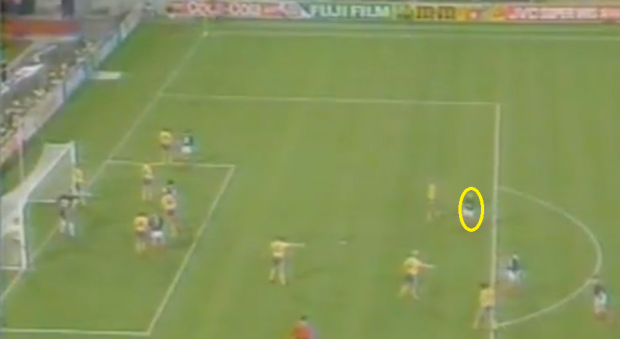 McCall, circled in yellow, loiters on the edge of the Swedish penalty area as Scotland deliberately overload the six yard area closest to the corner taker. The Swedish defenders in the centre of the penalty area, which Scotland have tactically left clear, are preoccupied (notice their outstretched right arms pointing) by Scotland’s backpost runners and have assumed McCall will just cover on the edge of the box. McCall drifts to the penalty spot

Scotland have drawn more attention, by design, to the near post area and McCall has drifted in onto the penalty spot. Although Sweden have all of their players inside their own box to defend the corner they are relatively unconcerned by McCall in this position as they have two players near enough that they could win an aerial challenge against the diminutive Scottish midfielder. 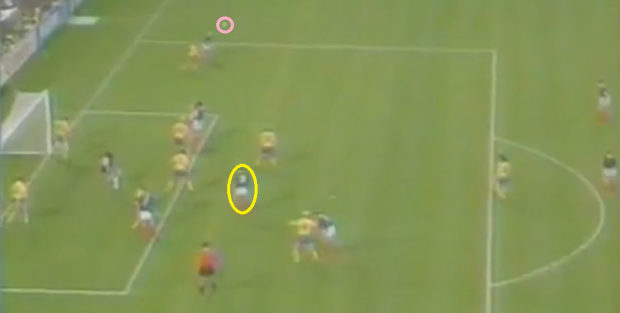 The smart movement of the two near post Scottish players away from the goal draws the attention of McCall’s marker and he slips free in the space directly in front of goal. 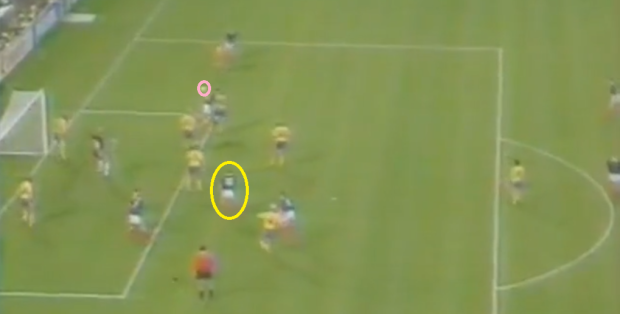 The inswinging corner delivers the ball (circled in pink) to the corner of the six yard box making it difficult for a Swede to win the header due to the body position of the Scottish attacker. 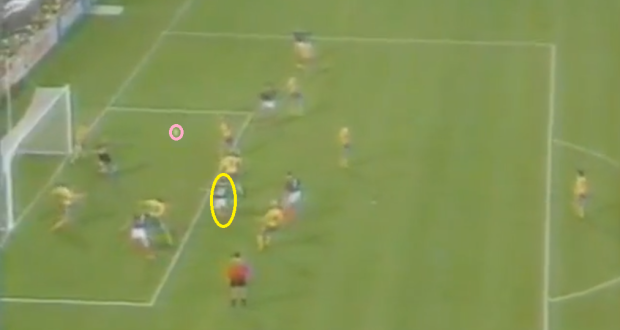 Danger in the goal mouth

Suddenly, the tactics become clear to Sweden – a near post flick on rather than an attempt on goal and McCall (circled in yellow) is free on the edge of the six yard box with the ball (circled in pink) descending towards him. 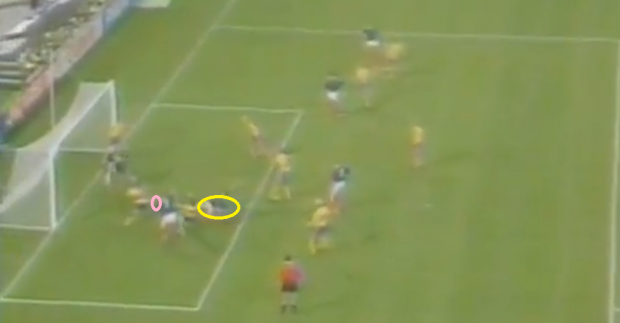 Scotland’s smart set piece routine, no doubt thought up by manager Andy Roxburgh and rehearsed on the training ground, pays off as McCall dives and stabs the ball home into the Sweden goal. 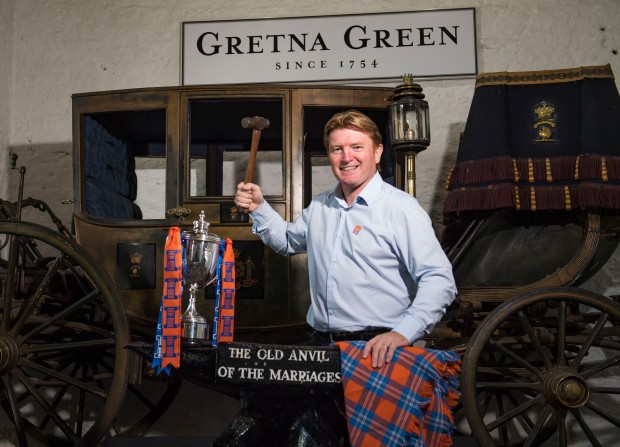 Well, actually, the above tactical theorising isn’t quite true.

This is a danger with tactical analysis of the sort that appears on ‘football twitter’. At times it can make assumptions about what a coach or player or team’s intentions were and my view is that, unless clear patterns can be identified over time or if the coach or player in question has confirmed what the intentions were, it should approach the subject with a little less certainty than it often does. This point was made by football writer Priya Ramesh on Twitter and, although her account is private, you can view a response which reiterates her view below.

This is a great point. If tactics writers treated it more like a literary analysis than scientific research, it might not be so much of an issue. But I also understand that looking authoritative is half the battle with that kind of stuff.

Analysis of the game of all sorts is to be encouraged and, especially after the 2018 World Cup, a lot of interesting work has been published about set pieces including corners. McCall’s tale about a World Cup corner is a funny, cautionary note about this sort of analysis.