Here, deep in the bowels of Pure Fitbaw Towers, we’ve finished basking in the glow of a Scottish victory over Albania in the Nations League and have fired up the dusty old statistical scouting databases, twiddled with our abacuses and watched hours and hours of game footage to bring you the first of our International Break scouting reports. Each International Break we will analyse some stats and highlight some young players to keep your eye on throughout the season. 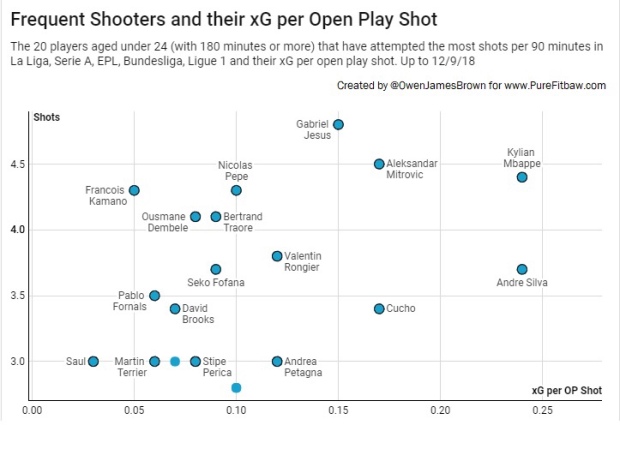 Shown above are the twenty players, aged under 24, in Europe’s ‘top 5 leagues’ that have taken the most shots per 90 minutes so far this season and the quality of their shots from open play as measured by the average xG (a stat that tells us how likely a shot is to be a goal based on things like where the shot was taken from) per shot. It’s not a shock to see Kylian Mbappe in that desirable top right area; with both a high number of shots per 90 at 4.4 and a high xG per open play shot of 0.24. For context, Edinson Cavani took 3.68 shots per 90 with an average xG per open play of 0.23 for the same club, PSG, last season. So, while it is only 220 minutes into Mbappe’s season he is shooting a lot from good locations and, if that’s sustained, it could lead to him exceeding Cavani’s 17/18 total of 28 league goals.

Other notable names on the viz include Andre Silva who seems to be making a good start to life in Spain, Aleksander Mitrovic who has already scored four goals for Fulham this season, statistical darling Gabriel Jesus, Ousmane Dembele who is shooting almost twice as often as he did last season but maybe not from the smartest of locations and Saul, who is taking almost half of Atletico Madrid’s shots but is definitely not doing so from smart places the majority of the time. 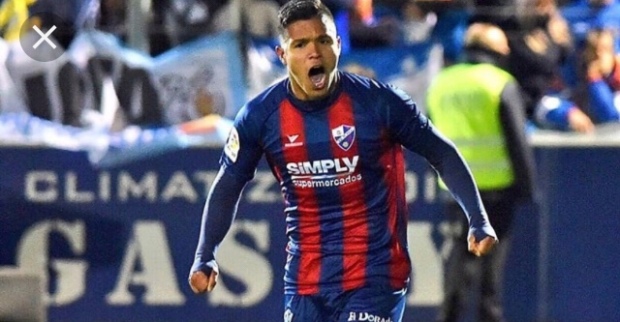 Our one to keep an eye on is Juan Camilo Hernández Suárez aka Cucho. The 19 year old Colombian is in his second season on loan at Spanish club SD Huesca from Watford and scored 16 times in the 17/18 campaign as the team gained promotion from Segunda to the top flight for the first time ever. A predominately right footed squat powerhouse with the technical ability to strike good shots from just outside the box, a poacher’s instinct with the pace to get him in position at the right time and a tenacious aggressive dribbling style that can cause danger close to goal he is, even at this tender age, stylistically evocative of elite South American centre forwards such as Sergio Aguero and Luis Suarez.

Whether Cucho can scale those heights in his career remains to be seen but taking almost 3.5 shots per 90 with an average xG per open play shot of 0.17 so far this season is very encouraging and he has a channeled, aggressive confidence to his play which suggests that, as a minimum, he may be ready to lead the line for parent club Watford next season and join Alfredo Morelos, well known to Scottish readers, in making the step up to the Colombian senior international squad.

Goals are obvious. Whether tap in or long shot or even an audacious overhead kick by Cucho they are literally a crowd pleaser. Assists are better; noble acts of creativity and self sacrifice, but they live too much in the shadow of goals to really be anyone’s true love. Key Passes are better still; often assists and therefore possessing all that nobility and creativity but with added will they won’t they dramatic uncertainty and, if the chance is missed, all that glorious failure to bask in with little or none of the blame. However, true footballing heroics are to be found in the smartly timed but crunching tackles, the swift pounce of the interception and the dilligently blocked pass of the modern defensive midfielder. These actions require the sort of aggressive mentality, elite athleticism, high intelligence, good decision making and positional awareness that may not be as easy to spot or instantly gratifying while watching a match but are key to the success of teams in this era. The destroyer has come to the fore – from the cool metronomic Sergio Busquets with his incredible tackling and intercepting ability, often under appreciated in comparison to his skills on the ball, to impish, big smiling ball winning Ngolo Kante with his insatiable ability to smartly anticipate just where to be and when to be there. Ibrahim Sangaré is our hot tip as a player to watch in this position throughout the 18/19 season. 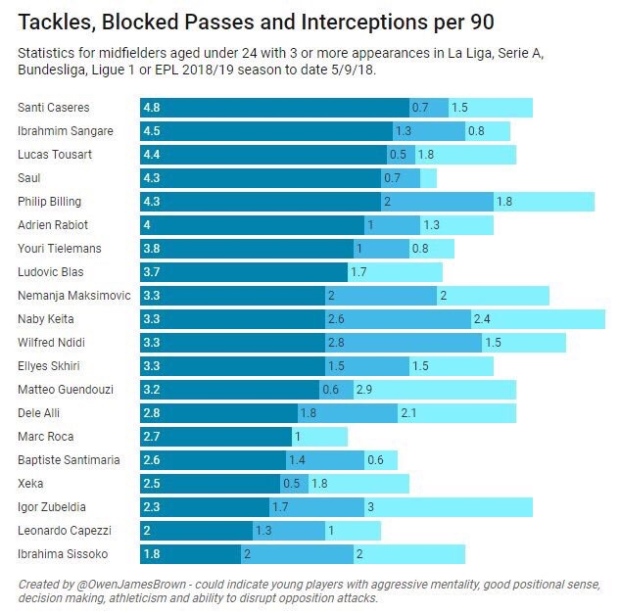 Some of the basic indicators of proficiency in this area may be numbers of tackles successfully won, passes blocked and interceptions made. While there can be concerns that a high number of defensive actions can be a result of a player having to clean up their own mistakes and there is a case to be made for comparing possession adjusted numbers I believe these basic numbers are a good starting point ahead of further scouting. Above are the twenty players, aged under 24, with the most tackles won per 90 minutes and the number of blocked passes and interceptions per 90 they’ve made in Europe’s ‘top 5 leagues’ so far this season. Some notable names leap out including some that also contribute to a high level in attacking terms such as Naby Keita, Dele Alli and Saul. While Sangaré, a 20 year old Ivorian, has made 3.3 successful dribbles per 90 in Ligue 1 for Toulouse so far this season his key strengths are definitely defensive.

Awareness of movement, intelligence to know when to not be pulled out of position, picks up free man in his zone, picks pocket with leggy frame, strength to hold off, available for pass. Smart, calm, athletic. Read more https://t.co/SWp4G8c7On pic.twitter.com/umC9JHYsoc

He is a leggy 6’3 with the ability to pick the metaphorical pockets of opposition players by reaching a foot around them as they shield the ball and, despite his slim physique, is able to win tackles against the most aggressive of opponents. Most encouraging is his positional awareness and the intelligence he has in terms of occupying space, tracking opposition movement and placement of his own cover shadow. Toulouse narrowly escaped relegation last season but this campaign, after a bruising opening day loss, have won three in a row and sit third in Ligue 1. While Sangaré could develop further in terms of his willingness to seek possession from his goalkeeper and centre backs he has been a key part of their progress and is definitely a talent to keep an eye on this season both domestically for Toulouse and, if they qualify and he is selected, at next summer’s Africa Cup of Nations for Ivory Coast.

As well as Sangaré some names Pure Fitbaw suggests you watch from this list are combative young Argentine Santi Caseres (sadly injured for Rangers first meeting with Villarreal in the Europa League), Phillip Billing who is adding some much needed mobility to Huddersfield’s midfield this season as I tipped, for StatsBomb, he might and all action Spaniard Igor Zubeilda.

Let Pure Fitbaw know your thoughts on Cucho and Sangaré and who we should scout out in the next International Break.