Three lacklustre performances from Steven Gerrard’s Rangers in a row have highlighted the side’s lack of a creative spark in the middle of the park. Unable to break through the lines, playing in front of the opposition and not being able to break down low blocks are just some of the valid criticisms made about recent play. Are Rangers missing what Josh Windass offered?

Centre forward Alfredo Morelos has been isolated and easier for the opposition to control. Particularly in the games against Aberdeen and Kilmarnock there were very few runs beyond Morelos or attempts to create space for the Rangers frontman. Ovie Ejaria has played in the 10 role and shown flashes of ability but tends to drop too deep. In fact all of the midfield have been too conservative and seem happy just to maintain possession.

“We can’t keep relying on Alfredo (Morelos) he is the only one who looks a goal threat for us at the moment“  – Steven Gerrard after the Kilmarnock draw 31.10.18

Windass was far from the finished article as a player and also had a difficult relationship with Rangers fans. Even though he had a hand in 26 goals last season the young Englishmen was always living on borrowed time after the infamous shooshgate. 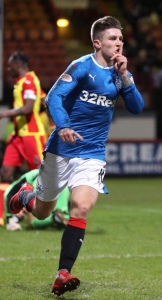 Despite the frustrations that Windass caused many fans at times he could be bringing a different dynamic to what is becoming a predictable Rangers midfield. That missing spark of inspiration or different style of run is evident when rewatching the player’s performances from last season.

There’s an example of this in the shooshgate match against Partick Thistle.

Quick distribution by goalkeeper Wes Foderingham to centre back David Bates is followed by a direct ball into the feet of Daniel Candeias. The Portuguese midfielder uses the zip on the ball to flick it around the corner into the path of Jason Cummings.

Windass is currently in the centre of the pitch and has already started to anticipate this section of play. He can clearly see the space that Candeias will run into. Two Partick Thistle defenders are drawn near the ball and towards Rangers striker Jason Cummings. There is a clear gap that Windass spots he himself can run into.

As the transition develops Windass has already covered fifteen to twenty yards in order to give wideman Candeias a target in the middle. Candeias is now looking across at Windass’ position to understand his next move.

There is still around twenty-five yards to cover before Windass will be in a position of threat in the Partick Thistle penalty box. 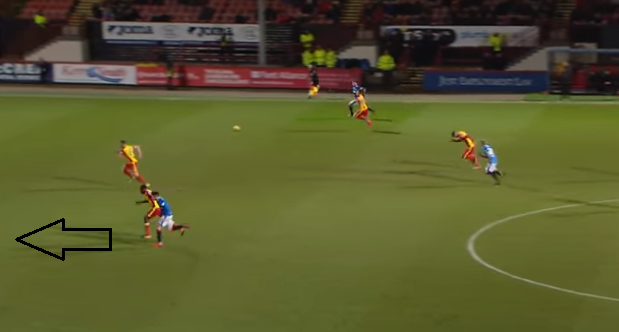 Abdul Osman tries to impede Windass as this move is unfolding but Windass has the strength to hold off the Partick Thistle midfielder.

Candeias plays a perfect ball into a dangerous area so that if Windass can win the foot race against the mismatched Osman he will have a clear shot at goal.

Anticipation, strength and speed have helped Windass to cover almost fifty yards, travelling past three Thistle defenders in the process and presenting him with the opportunity.

He shows composure to open up his body and go back across the Partick keeper to slot home. 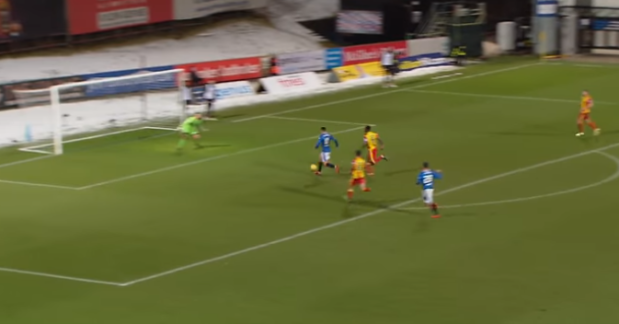 That’s just one example of what Windass offered Rangers last season. Rangers could really be benefiting from the quick transitions that Windass facilitates with his pace taking players out of position and creating space for teammates.

Against St Johnstone the attacking midfielder scored again after good movement and a clever run into the box.

Comparing the 2017/18 stats of Windass, Morelos and Kyle Lafferty also suggests he was let go a season too soon.

You can’t win games of football if you don’t have attempts on goal and Windass surprisingly outperformed Morelos and Lafferty in terms of shots attempted and shots on target per 90 minutes. He landed one shot on target more than the now Rangers attacker Lafferty just over every two games played.

Lafferty’s height advantage might lead to the assumption that he can provide more productive link up play and creative flick ons but actually the Northern Ireland international made no assists last season. The Expected Assists or xA stat suggests this wasn’t due to poor finishing by his team mates. The quality of chances Lafferty set up indicated an expected return of one assist every thirty-three games. How about Windass? Significantly better as he was expected to return an assist once every seven matches.

Windass may not have been every Rangers fan’s favourite but right now he is the type of player that Steven Gerrard desperately lacks.