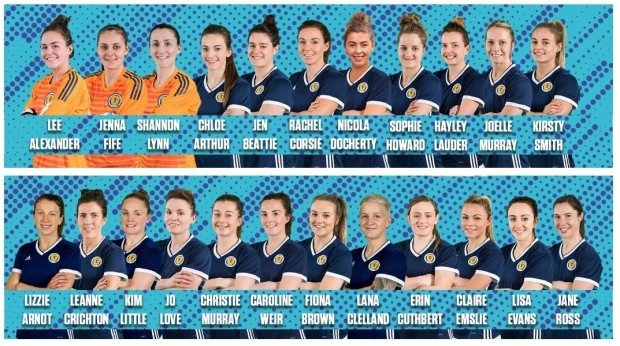 It’s official Shelley Kerr has selected her twenty-three women squad for Scotland’s debut at the Women’s World Cup in France. Here at Pure Fitbaw we give you the low down on the names and faces you’ll be cheering on this summer as Kerr’s side take on England, Japan and Argentina in Group A before hopefully going further than any of our national sides have gone before by making it into the knockout stages.

The first of five Glasgow City players to make the plane to France, Alexander will head across the channel as Scotland’s number one. The stopper took on the mantle after the retirement of 203-time capped Gemma Fay. As well as experiencing domestic dominance with her Petershill Park based side she has also spent a season playing in the highly regarded Swedish Damallsvenskan for Mallbackens IF.

Fife’s announcement in the squad comes on the back of her penalty shootout heroics in the final of this season’s SWPL Cup as her Hibs side defeated Glasgow City 4-2 on penalties with Fife making two key saves. Having started her career at Murieston United she has progressed to take on the role as understudy for Alexander at international level with her debut coming in January 2018 as a substitute against Norway.

One of two player’s currently plying their trade in the aforementioned Damallsvenskan with the 33 year old having moved to Vittsjö GIK in 2014. She has also had spells in the USA as well as with Hibernian including an emergency loan move to Chelsea where she continued to train with the Hibees during that time.

After playing for both Celtic and Hibernian Arthur made the move south to the WSL in 2016 signing for Bristol Academy before a 2018 move to her current side Birmingham City.  She was one of the key players in a Blues side that finished 4th at the end of the current WSL season having amassed a club record points total.

Centre half Beattie comes into the squad as one of Scotland’s most experienced players. She currently plays for Manchester City with her side winning both the League Cup and FA Cup this season and she can also add spells with Arsenal, Montpellier and Melbourne City to an impressive CV. With 22 goals to her name her threat from set pieces is well known although she hasn’t scored for the national side since a 10-0 victory over North Macedonia in 2015. A winner against England in Nice this June seems as good as time as any to get back in the habit.

Scotland’s captain and one of a number of leaders in the squad has been one of Scottish football’s biggest success stories of recent times. After spending five years at Glasgow City she would spend a season at Notts County before heading stateside with a spell at Seattle Reign preceding her move to Utah Royals, the place she currently calls home. Throw in a loan spell at Canberra United and Corsie’s experience across the globe can not be questioned or underestimated in its importance.

Left back Docherty might not have scored yet for the national side but anyone who was present for her sensational SWPL Cup Semi Final double against Rangers will know that the energetic full back has the odd howitzer in her locker. Docherty came into the squad after injury ruled out Arsenal’s Emma Mitchell and has since gone on to make the left back role her own. One to watch.

German born Howard is perhaps best known for her spell with Frauen-Bundesliga side 1899 Hoffenheim however she currently plays for WSL side Reading, with the Berkshire club reaching this year’s FA Cup Semi Finals. Despite calls to German youth sides in the past Howard made her Scotland debut in 2014 during a 5-0 away defeat to Belgium.

If thing’s go well for Lauder she will earn her 100th cap during this summer’s tournament. At only 28, the left sided player has fitted in a ton during her career to date with spells in Cyprus, Finland, Sweden and of course Scotland. Her versatility to cover across a number of positions will be of immense benefit to her coach.

If anyone is unsure of how good a defender 32-year-old Murray has become then I encourage you to watch her extra time SWPL Cup Final performance against Glasgow City this season. The Hibernian captain is a colossus for her side and after what had been a summer of transition in Edinburgh Murray remains a reliable constant.

Speaking of that transition, Smith was one of seven players to leave the Ainslie Park side for new challenges south of the border when she joined Manchester United along with team mate and fellow squad member Lizzie Arnott. In the Red Devils first season in the WSL set up Smith was one of the key members of a side that won the WSL2 title and as a result gain promotion to English football’s top tier.

As just discussed Arnott, along with club team mate Smith, has had a successful season as part of Manchester United’s WSL2 championship winning side, transferring her lethal form with Hibernian in Scotland to English soil scoring six goals on her side’s path to league glory.

Currently in her third spell with the Glasgow giants, Crichton is another experienced face from Scott Booth’s league dominating side. With a spell in the WSL also under her belt at Notts County she is another player that will provide options for head coach Kerr.

One of the players in the squad with high hopes that they have the ability to provide that crucial X Factor come kick off in June. Those hopes are understandable such has been Little’s career to date. A former FA Women’s Player of the Year and BBC Women’s Footballer of the Year the goalscoring midfielder’s reputation is perhaps second to none in this current squad. Having won trophies with Hibernian, Arsenal, Seattle Reign and Melbourne City Little will see this as an opportunity to shine on a global stage with her winner against Brazil earlier this year a clear statement of intent.

Jo Love goes into France 2019 as the squad’s most experienced international. The midfielder has achieved it all in the domestic game in Scotland primarily with Glasgow City where she currently still turns out, usually with a massive smile on her face. Currently Scotland’s fourth most capped player of all time this World Cup was perhaps her last chance of making an appearance at the tournament and so expect the veteran to relish every moment.

The Liverpool midfielder who can also play up top as and when required has had a career spent flitting between both sides of the border including spells as part of the all conquering Glasgow City side of the early 2010’s. She made 17 appearances as her side finished 8th in this year’s Women’s Super League.

Another player to have enjoyed double cup success with Manchester City Weir began her career in England aged just 17 after signing for Arsenal on the completion of her exams. Spells at Bristol Academy and Liverpool followed before her move to Manchester where she has scored five goals in her debut season for the Cityzens.

Stirling born Brown has called the Damallsvenskan her home since 2017 after spells with Eskilstuna United and current side FC Rosengard, Sweden’s most successful women’s side. That success includes a 2018 Svenska Cupen victory of which Brown was part of. In one of the most competitive areas of the squad Brown may have to make the most of the minutes she gets throughout the tournament.

If you haven’t watched the excellent A View from the Terrace feature on Lana and her path to Florence than I would encourage you to do so. After successful spells in Scotland with both Rangers and Spartans Clelland moved to ASD Pink Bari where her outstanding form would continue. A prolific three year spell at UPVC Tavagnacco where she scored at a rate of nearly a goal a game led to a move to La Viola in 2018 where her success continued scoring 12 goals in 16 games as Fiorentina finished 3rd in Serie A.

Chelsea’s current Player of the Year was also nominated for this season’s PFA Player of the Year only losing out to Arsenal’s Dutch goal machine Vivianne Miedema. Having started her career with Rangers before moving to Glasgow City and then Chelsea Cuthbert is very much the darling of the Tartan Army as much for her personality as for her talents on field. This is perhaps best articulated with her wonderful goal away to Lyon in the London side’s Semi Final of this season’s Women’s Champions League. At only 20 the footballing world is at Cuthbert’s feet and I can’t think of a better time to truly announce herself to a global audience than to do so at this summer’s World Cup.

The last of Manchester City’s FA Cup & League Cup winning trio she is another Hibernian alum heading to France this summer. After spells in Edinburgh and at Bristol Academy Emslie has become a key member of a City squad that also finished second to Arsenal in this season’s FA Women’s Super League.

26 year old Evans started her career at St. Johnstone before a move to Glasgow City where she scored at a rate of more than a goal a game earning her a move to the Frauen-Bundesliga. Two seasons with Turbine Potsdam were followed by a spell at Bayern Munich where she won the FBL title. A move to Arsenal then followed with title success again the order of the day as she along with fellow squad member Little lifted the FA Women’s Super League title. Listed in the squad as a striker Evan’s versatility down the right hand flank could see her fill any number of positions in the side.

It says a lot about the ability and character of Ross that when West Ham United decided to make the move to full time football that she was one of the first people chosen to lead their attack in their debut WSL1 campaign. Scoring at a goal nearly every second game for the national side Ross provides another layer of experience to an exciting Scotland front line.

So that’s the squad. How do you think they will get on? Is there anybody missing that you think deserves to be squeezed in? Let us know in the comments below and remember that you can join us in giving Shelley and the girls “The Perfect Send Off” at Hampden on Tuesday 28th May where Scotland take on fellow World Cup debutants Jamaica in front of what is set to be a record crowd.

A man on a one man mission to prove that the worlds of food and football can collide and thrive. At Leading the Line you can read his musings on the wonders of modern football particularly in Scotland and Spain whilst at Meat Filled Pastries you can see his piehopping adventures across Scotland. Lastly is his new venture, The Scrancast, a food podcast looking at the stories behind the food in Glasgow and beyond. A Communications graduate from Glasgow Caledonian University, he also acquired accreditation as a Radio News Journalist whilst studying at The National Broadcasting School based out of the University of Sussex. He has also spent time living in Madrid embracing the food and culture of Spain's largest city. Part Glaswegian, Part Madrileño. A city boy on the search for a good story. View all posts by Chris Marshall