Rewind to the 19th of June and Scotland are 3-0 up against Argentina, with only fifteen minutes to go in the final group game of their incredible World Cup performance, and for Shelley Kerr and her team a famous win looked inevitable.

That being said we all know how Scottish sporting fairytales end. There is bravery, heartbreak and a lesson to be learned. Maria Bonsegundo delivered all of that with a 94th minute equaliser to ensure that we left France without a deserved victory. Walking into the dressing room at full time would have been a hard task for any leader. How do you control your frustration? What do you take from the game? Where do you go from here?

The platform that Shelley Kerr and the national side‘s summer exploits elevated the game to meant that she may not have expected to have to answer questions around internal squabbling over funding, debatable infrastructure and matches being played on a public park. However, those were just some of the topics that Kerr faced at the recent press conference for the Scotland squad announcement and promotion of the upcoming Glasgow City vs Hibs SSE Cup Final.

Kerr answered these questions with a sense of calm that is almost ice cold in tone. Adversity and doubt is something that would have followed her all throughout her career and these events would have been no different and likely add to the infectious resilience that Kerr radiates.

At this point Pure Fitbaw was intrigued and wanted to know more about the evolution of Shelley Kerr as a leader and when it was our time to get a brief insight into the Scotland manager we asked how she has developed over the past 12 months.

“I think as a coach you always have to be open minded to learning. I still feel myself learning my trade even though I have been involved in the game for a long long time. To be involved on the European and World stage you are only going to get better if you are open to learning and that is the mantra I hold myself to.

There are so many people you bounce off of. I have a lot of mentors. Malky Mackay, the performance director, he is always there on the end of the phone and was with me at the World Cup. You also have Graeme Jones, Head of High Performance, who I speak with regularly

I also like to get a different view with support from a sports psychologist as well as from friends and family.”

A well rounded support mechanism will be important to anyone working in what can be the mental battlefield that is football management.

With the announcement of the Scotland squad for the upcoming game against Albania Pure Fitbaw was intrigued to hear more about how the selection process works at national team level, especially when there have been question marks over Steve Clarke’s squads. 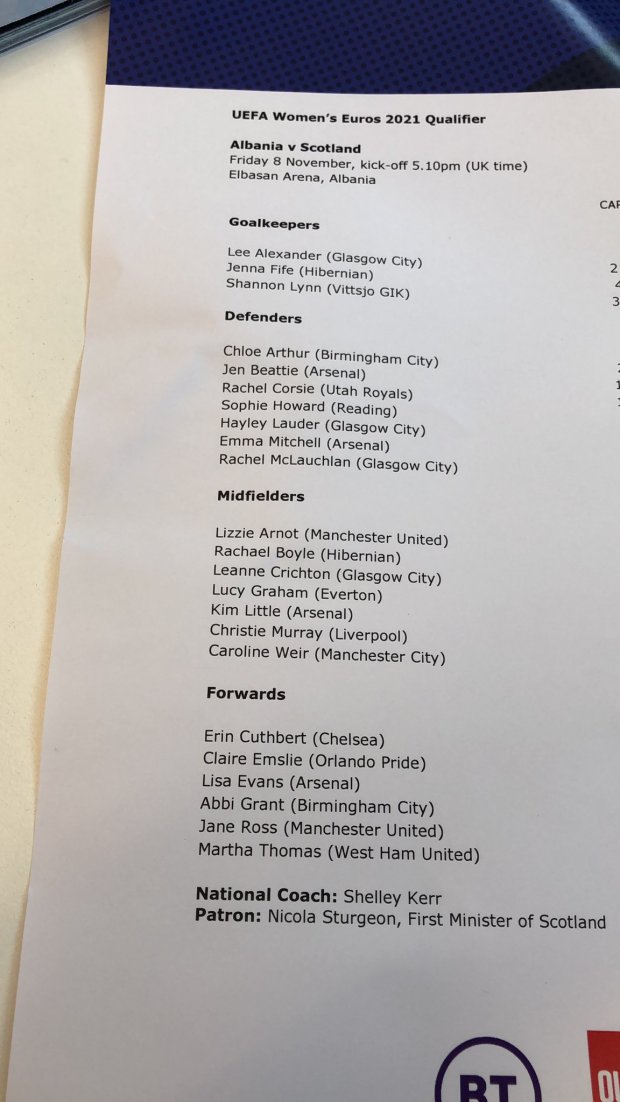 “We will establish a critical mass of players with it being anything from 33-40 players.

Then we have a framework that we operate from and we have to consider aspects such as availability, injuries and the opponents we are going to be up against. How are we going to set up against them tactically? Who is the best fit within that framework?

It is one of the toughest decisions you make as a manager.”

Kerr mentioned that Scotland have been tracking recent call up Martha Thomas for almost two years now which is a clear example of this framework in effect.

The former Charlotte 49ers, Le Harve and now West Ham forward will offer a real threat for Scotland. A player that has a multifaceted approach to attacking opposition with power and pace driving at defenders or being able to outperform the plyometric capability that seems likely for someone who is only 5ft 7.

You can see first hand in the highlights below against Arsenal the impact that Thomas might have for Scotland.

When Pure Fitbaw asked Shelley Kerr about how Thomas might fit into the culture of the existing Scotland squad her leadership skills really came through.

“The players do that really well, they are open as a group but also very tight.

As an example, we had Martha in the recent training camp and (the players did) simple things like making sure she was included in the small things like just going for a coffee. Those are important to make sure new players get integrated quite quickly.

Martha does have what I would say is an experienced head and her communication skills are excellent.”

This might be a case of how the framework has supported Kerr but we also discussed how that framework will also be bound by the constraints of UEFA or FIFA squad regulations.

“It’s the most heart breaking, toughest aspect of the role having to leave players out. I always like to communicate that to the players where and when I can. It is tough, it’s only a squad of 23 so players are always going to miss out.”

Football, especially in Scotland, can be very much a “Do as I say” leadership culture at times but Kerr clearly appears to use servant leadership – where the main purpose of the leader is to serve those they are responsible for, sharing power and allowing individuals to develop to their maximum potential – as an aspect of her national team stewardship.

“We want to give the players responsibility here, it’s not about Shelley Kerr, It’s a national team and it’s important the players respect the honour and a privilege just like it is to me, They create the culture, They set the parameters and they do the hard work”

Scotland will be heading into the game against Albania full of confidence after a 8-0 demolition of Cyprus and speaking with Shelly Kerr gives me confidence that lessons have been learned and we have moved on from the heartbreak of the World Cup. The foundations and vision for success is apparent and we have a group of players, selected with a clear framework, that can give us another major tournament and rebuild our national pride.