We’re only 6 game weeks into the return of the Scottish Premiership and we’ve been treated to a whole host of talking points and surprises. Hibs have started the season in terrific form meanwhile the Old Firm have already dropped points, furthering their hatred for plastic pitches in the process. Motherwell look a million miles away from the kind of performances which led them to 3rd place last season, while newbies Dundee United have transitioned seamlessly into the higher division under new manager Mickey Mellon. Gary Holt has gone off the rails playing Efe Ambrose at left wing-back and Ross County now look… sexy?

However, some things never change, and Hamilton Accies are near the foot of the table, struggling to score. With only 2 goals to their name after 5 games I thought I’d analyse Brian Rice’s men and see what they need to do to start scoring.

Alter the role of the striker

Hamilton have played a pretty direct style so far this season, averaging 73 long balls per game. This is by no means a bad thing and if anything, makes sense to get the most out of their front two while also bypassing that midfield (which we’ll get to later).

As Rice’s favoured target man so far this season, David Moyo has been the recipient of most of Hamilton’s direct play. He is averaging 18.1 aerial duels p90 and is winning 8.8 of them, the 3rd most in the league (minimum 270 mins). Pretty impressive numbers from someone who is only 6-foot-tall, but through watching Moyo it is clear that his powerful leap makes him a general nuisance for defenders. It’s this aerial presence possessed by Moyo which Hamilton have chosen to build the majority of their attacks around in the early stages of the season.

Moyo has been partnered mostly with the quicker Andy Winter/David Templeton in Hamilton’s first 3 games against Celtic, Ross County and St Mirren. When in possession, Accies have chosen to hit Moyo early and look for him to win flick-ons to send his strike partner in behind. This tactic has been fairly limited in its success with the Accies only scoring once in these 3 games. Now, I’m not proposing Rice completely reinvents the wheel but simply alter an aspect of his striker’s role. 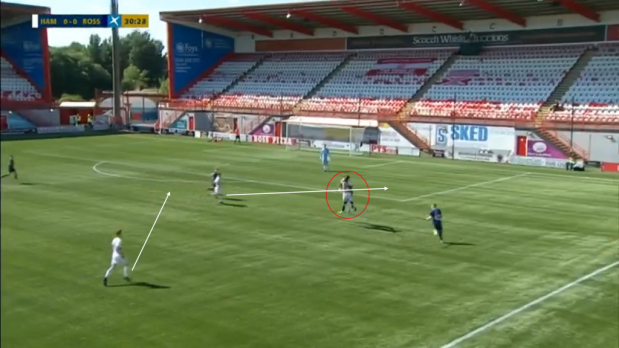 Too often do Hamilton lose possession through going long to their target man to then fail to pick up the flick on. The image above is a great example of Moyo being too eager to send his partner in behind without realising the potentially more dangerous alternative. The clip starts with Fjortoft picking the ball up off of his keeper and straight away looking to go direct to Moyo. Winter anticipates the striker’s flick on and makes a run across his marker into the limited space behind Moyo. Ultimately, Moyo attempts to send Winter in behind what is already a fairly deep Ross County back line but the centre half is able to block the ball going through.

What Hamilton and Moyo need to work on is understanding the appropriate time to hold the ball up. In the example above, Winter does really well to pull the centre half marking him away from the action, giving Lewis Smith acres of space in the centre to exploit. Pair this with the fact the County right back is slow in narrowing up and all it takes is for Moyo to hold the ball up for a second or even nod it off to Smith first time and Hamilton have a chance in an extremely dangerous area.

The addition of Marios Ogkompoe to the starting 11 has helped in connecting the midfield to the attack, to an extent, as he seems a little more willing to hold the ball with his back to goal.

Here, a Motherwell goalkick is immediately headed forward by Scott Martin, finding Templeton who, tasked with the role of playing off the striker, drops between the units to pick up the ball.

His first thought is to play it into Ogkompoe who lays it off to him after he’s made a run round the back of the Motherwell player marking him. The ball is then played through to the winger who’s come inside again, but the pass is heavy and the keeper collects. While no shot comes from it, this is a great example of how Hamilton should look to continue build their play. Use the target man as a focal point to help build up play, while connecting the midfield and THEN finding runners in behind rather than flicking on countless balls behind for the second striker to aimlessly chase. In Moyo and Ogkompoe Hamilton have 2 strikers who are physically capable of holding off any centre half in the league, so play it into them and let them protect the ball to allow others to get themselves up in support.

Find a balance in midfield

Up until Hamilton’s 6th game against Rangers, their midfield base has been built upon the pairing of Scott Martin and new signing, Ross Callachan. Now, what each of these players bring you is energy, the ability to get up and down the park all game, they’re busy and will get stuck in but neither are particularly proficient in possession. While their graft in the middle of the park is commendable, Hamilton aren’t helping themselves by having both Martin and Callachan do the same job in there.

We’ve already established Accies have been pretty direct this year. In fact, they’ve completed the fewest short passes (190) per game in the league by quite some distance (St Mirren next on 244). Why is this? Well, as already mentioned, they have two strikers who can dominate players in the air. But I also believe it’s been partially forced through the central midfield’s lack of composure and willingness to take on responsibility in possession.

Above is an example of where it would be ideal for one of the central pair to drop deep to pick the ball up off of the defence. The clip starts through Odofin playing a pass back to Fulton in goals. The St Mirren striker immediately chooses to press the keeper and his teammate follows (just out of picture), closing off the pass to the opposite centre back, Fjortoft. While Martin is being marked, Callachan is free (both just out of picture again) and should offer himself as a passing option to help his team in the build up, but doesn’t, and Fulton is forced to go long.

Watching Hamilton, they often feel very rushed and will choose to go straight to the forwards in as few passes as possible. It is possible that if Accies put slightly more value in patient build up then they could have a greater command of games, something they have struggled to do at times this season. However, much of this responsibility in the build up phase comes down to the central midfield pair, something neither of them have proven to be particularly adept in doing.

In albeit limited game time however, both Charlie Trafford and Reegan Minmaugh have impressed me while playing together.

A recent pick up from Inverness, Trafford looks the most comfortable of all the Hamilton players in sitting just in front of the back 4, picking the ball off of them and simply recycling play. While he probably isn’t as good as Martin at breaking up play, he isn’t too bad at it either.

Mimnaugh is another of Hamilton’s academy graduates who is reportedly attracting interest from bigger clubs. He’s played even fewer minutes than Trafford this season but has looked solid in the middle of the park. More attack minded than Trafford, he seems very comfortable in picking the ball up in tight areas and finding a pass. Out of all of Hamilton’s central midfielders, despite only being 18, Mimnaugh is the one who looks the most creative and where a chance could arise from.

Only once have Mimnaugh and Trafford started together which was in a 2-0 defeat to Rangers where Callachan played a strange no. 10 role. It was probably one of the few games I would be inclined to play the Martin/ Callachan pair in the middle however, Martin was shoved out to the wide area to try to nullify Borna Barasic’s threat.

In my opinion, going forward a midfield of Mimnaugh, Trafford and Martin could be a more balanced option. Of course it relies upon Rice turning away from his favored 442 formation but with Trafford sitting at the base, Mimnaugh’s qualities on the ball and the sheer graft of Martin, it should assist Hamilton in getting more of a foothold of games. This doesn’t mean they need to completely disregard their direct approach to their target man but does allow them to have a little time possession to re-organise and gives Mimnaugh and Martin time so get up and support the forward.

So far this season, Brian Rice has tended set up his midfield 4 with 1 winger on the right (L. Smith/ Johnson) and a more traditional striker playing on the left (Winter/ C. Smith/ Moyo). These wide players are encouraged to sit quite narrow by Rice, quite possibly to assist what is often an under-loaded Hamilton midfield. Often when the wide players pick the ball up they lack a degree of support as Hamilton’s fullbacks rarely over commit themselves to attacks. This leaves them with an option to pass it into the already congested central area or attempt to beat the opposition 1v1 or sometimes 1v2 out wide. 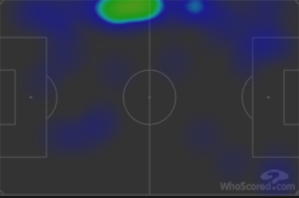 Shooting left to right, you can seen left back McMann, and right back Hodson’s touch map against St Mirren (WhoScored.com). Despite Hamilton needing to chase the game from the 19th minute on, neither full back had much of an impact past the half way line.

Hamilton’s narrow sitting wide players give the fullbacks a perfect opportunity to overlap and add width to the team. Furthermore, having a numerical advantage in the wide area will allow Accies to send more crosses into the likes of Moyo and Ogkompoe in the box who we’ve already established are significant aerial threats.

Credit where credit is due, Scott McMann has been able to create 8 open play key passes this season from his deeper position. Ross Stewart is the only non-Old Firm player with more (9). On the other side, it is unfortunate how well Hakim Odofin has started the season at centre back otherwise he would certainly add more of an attacking threat than Hodson at right back. But if Accies want to finally score an open play goal over 6 weeks into the season, both sides of the defence are going to need to be brave and give support to their teammates out wide.

It should be said that Hamilton are currently underperforming their xG of 5.01. Therefore probability would dictate that they should start finishing off a few more chances soon. However, if Rice can fiddle with the role of his striker, find a better balance in midfield and allow his fullbacks to be more positive, it can only help Hamilton in their attempt to keep their place in the Premiership for a 7th consecutive season and maintain their narrative of the jobbie that simply won’t flush.

Thanks to Modern Fitba for providing some of the data used in this piece. Further data by WhoScored.com. Feel free to follow me on Twitter @SPFLAnalysis

View all posts by SPFL Analysis

One thought on “Analysing Accies: What do Hamilton Need to do to Start Scoring?”