PureFitbaw’s brainchild Club X has a marketing plan in place but what the team lacks (well, did anyway) was an identity in the shape of a club badge and a pair of kits to play in.

With the club being named Club X, it was rather obvious that the badge should include an ‘X’ in some shape or form.

After some fiddling around with different ideas, it was decided that Club X’s identity should be a standalone ‘X’. Nothing too crazy nor nothing too fancy but something that the marketing team have given the thumbs up to as being instantly recognisable.

The badge allows for easy customisation and can be easily adapted to suit graphics, other promotional material and merchandise. 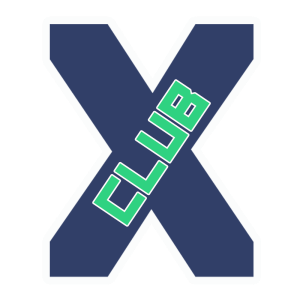 PureFitbaw’s very own kit fanatic Cammy Anderson was tasked with creating and providing a brief for kit designer Gavin MacIntosh, who has created the home kit that Greenock Morton will wear in the upcoming season.

The brief was as follows:

“The new season is fast approaching and Club X are in need of a new home and away kit.

“66% of the supporter demographic are between the ages of 16 and 60 and Club X would like to see a large proportion of the demographic be primary school age children.

“The thought process behind this is primary school age children are more likely to have kits bought for them with older fans traditionally not buying kits, or at least not as much as the younger fans do.

“Moreover, Club X believe having an edgier away kit could increase the club’s exposure across the globe and could in turn lead to revenue coming in from abroad.

The home kit is predominantely blue in colour with green detailing. As the brief stated, the design was to be traditional in order to appeal to the club’s older fans and this does exactly that. It is nothing crazy but certainlty very classy. 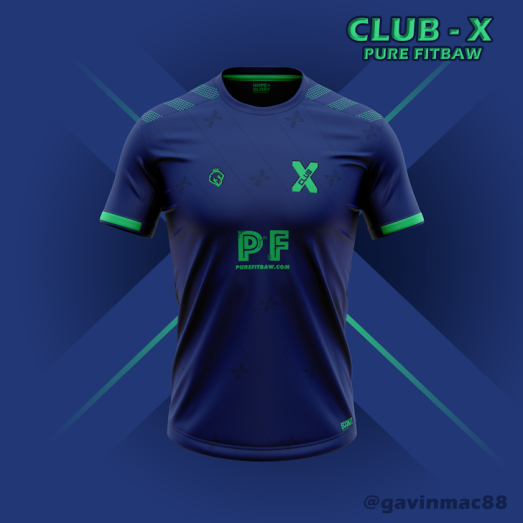 When we provided Gavin with the brief, we at PureFitbaw towers were all incredibly excited to see what he came up with.

The design is certainly ‘edgier’ than the home kit and certainly features a funky design. The kit is predominantely white and features grey and electric blue detailing.

The kit is certainly an eye-catcher and there will not be many people missed when wearing this kit – which was created with younger fans, who tend to like the more edgy designs, in mind. 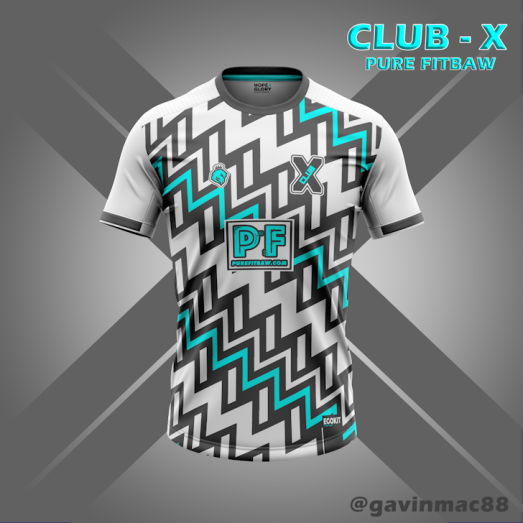 Upon receiving the designs, we had a chat with Gavin around his thought process behind both kits, as well as his decision to choose Hope & Glory as the kit manufacturer as opposed to one of the big names out there.

Starting with the home kit, Gavin said: “When the brief said ‘traditional,’ given the choice of colours, I immediately thought blue should be the predominant colour as green would be too bold.

“The green really made the manufacturer/badge/sponsor stand out, which is what I was looking for when designing. Having the badge and pinstripes embossed kept the design minimalistic in style to appeal to an older demographic.

“Slight detailing such as this, adds to the overall look of the shirt in my opinion, and makes it look premium quality- standing out from other standard blue jerseys.”

As for the away kit, Gavin reveals that he took inspiration from kits worn by many African clubs.

“The remit for the away shirt allowed me a lot more freedom when designing. I was told it had to appeal to a younger market and was to be an edgier design.

“The pinnacle of edgy kits for me are those worn by a lot of African teams; with bright colours and patterns. I took some inspiration from them when designing the pattern but as multi-colour kits are fairly devisive I limited myself to one vivid colour.

“To make some of the detail pop I added the turquoise blue, careful not to overwhelm the kit. I tried to ensure the design/logos/sponsor were visible without getting lost in the pattern.

With regard to choosing Hope and Glory, Gavin stated: “My choice of Hope and Glory over a larger manufacturer was because they offer premium quality, bespoke kits that are manufactured with production under one roof.

“This gives amazing flexibility for teams to order large or small amounts and rapid lead times. Larger brands are fairly restrictive unless you are selling in large numbers.

“Hope and Glory also offer their ‘eco kit’ range; which uses recycled plastic bottles to create the fabric. I’m not sure many other manufacturers offer this.

“Making the material this way is less environmentally harmful and works out cheaper than traditional polyester. It’s a no brainer for me; and would give Club X the opportunity to demonstrate social responsibility.”

With a marketing plan, a new badge and two cracking kits, it is now time for Club X to develop a recruitment strategy. Stay tuned for that to be released in the coming weeks.