With the data explosion in football it has never been easier to find good players. Free sources like FBref and Understat allow even casual observers to sort players on various useful metrics –anyone can quickly find that Sergio Aguero had the best expected goals per 90 in the Premier League in 19/20[1] or that nobody completed more dribbles per match than Adama Traore[2]. And this is before we even consider paid subscriptions for industry-leading software such as Opta and Statsbomb.

However, most clubs do not have the finances to just filter on certain stats and look to sign whoever shows up in top 10 results because they are likely already at an elite club or on the radar of one. This tactic may be suitable for smaller leagues but that brings about a different set of challenges around quality and compatibility. If you are looking to sign from a Top 5 League, then you may need to get more creative with your initial data shortlist. Inspired by a recent episode of the MRKT Insights podcast[3], I’ve had a look at a number of techniques that can give us an alternative view of players that may be of interest.

Adjusting Shot metrics per touch/shot instead of per 90

As I have already demonstrated, the players that rack up the best per 90 stats tend to be at clubs at the top end of their league. They deserve to be at the top clubs because they are talented players, but their stats may also be slightly inflated due to being in a side that typically dominate possession and chances. If you put Aguero in the Sheffield Utd team (lowest Shots and 2nd lowest Shot Creating Actions per 90 in the Premier League last season), it’s highly unlikely he’d get enough chances to hit the 0.90xG/90 he enjoyed. But on the flipside: could you find a player in a team with low attacking output that could see a big uptick in their per 90 numbers if they were afforded more opportunities?

Two metrics that can provide a bit of a leveller for rating forwards are Non-Penalty Expected Goals per Shot (npxG/Shot) and Final 3rd Touches per Shot. From these we should find players who take shots from good positions and players who shoot frequently, relative to how often they receive the ball. To narrow the search down to players in “bad” teams I’ve only included teams in Europe’s Top 5 who take a below average number of shots per match (Everton downwards when you rank by Sh/90) [4]. 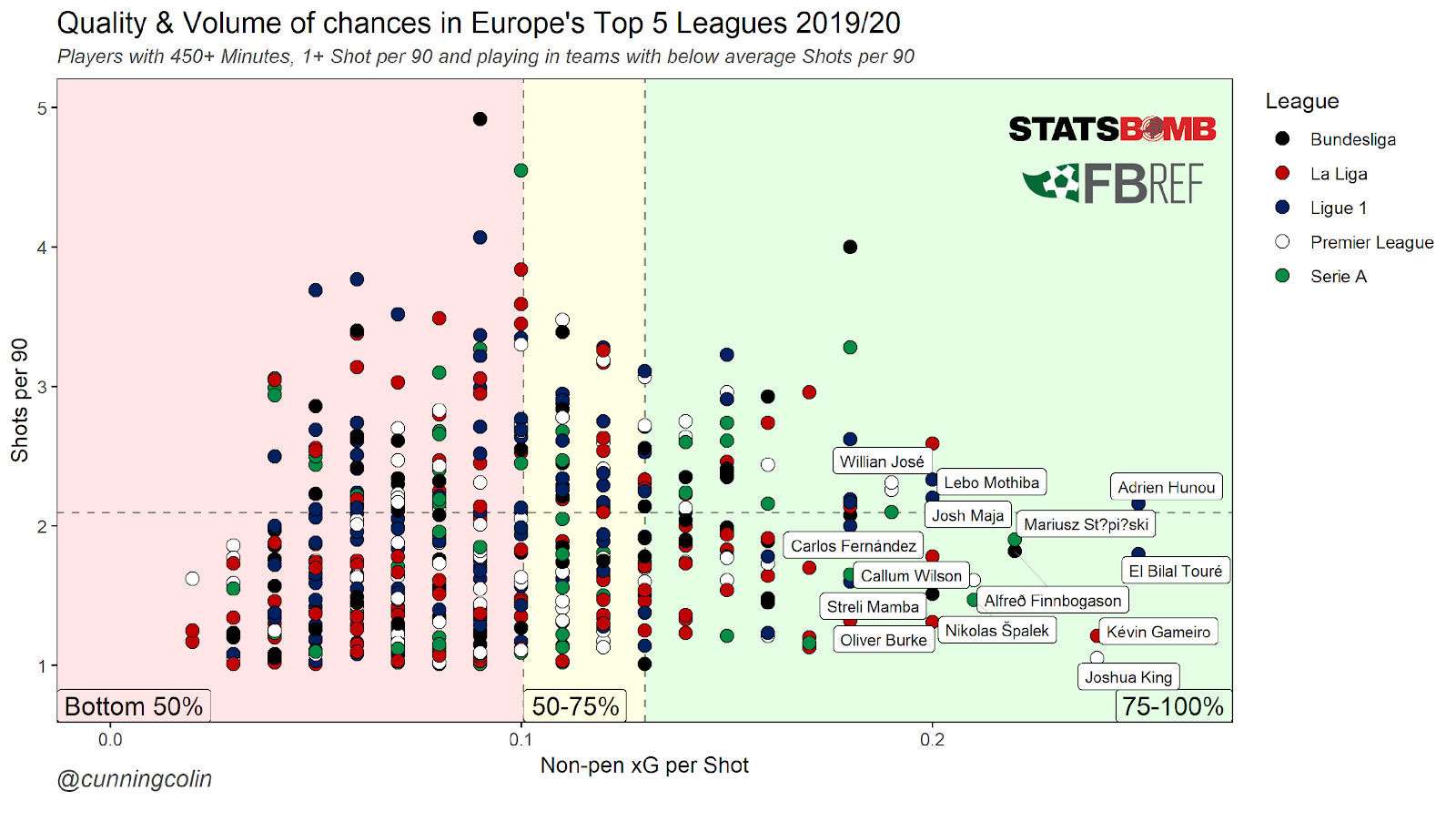 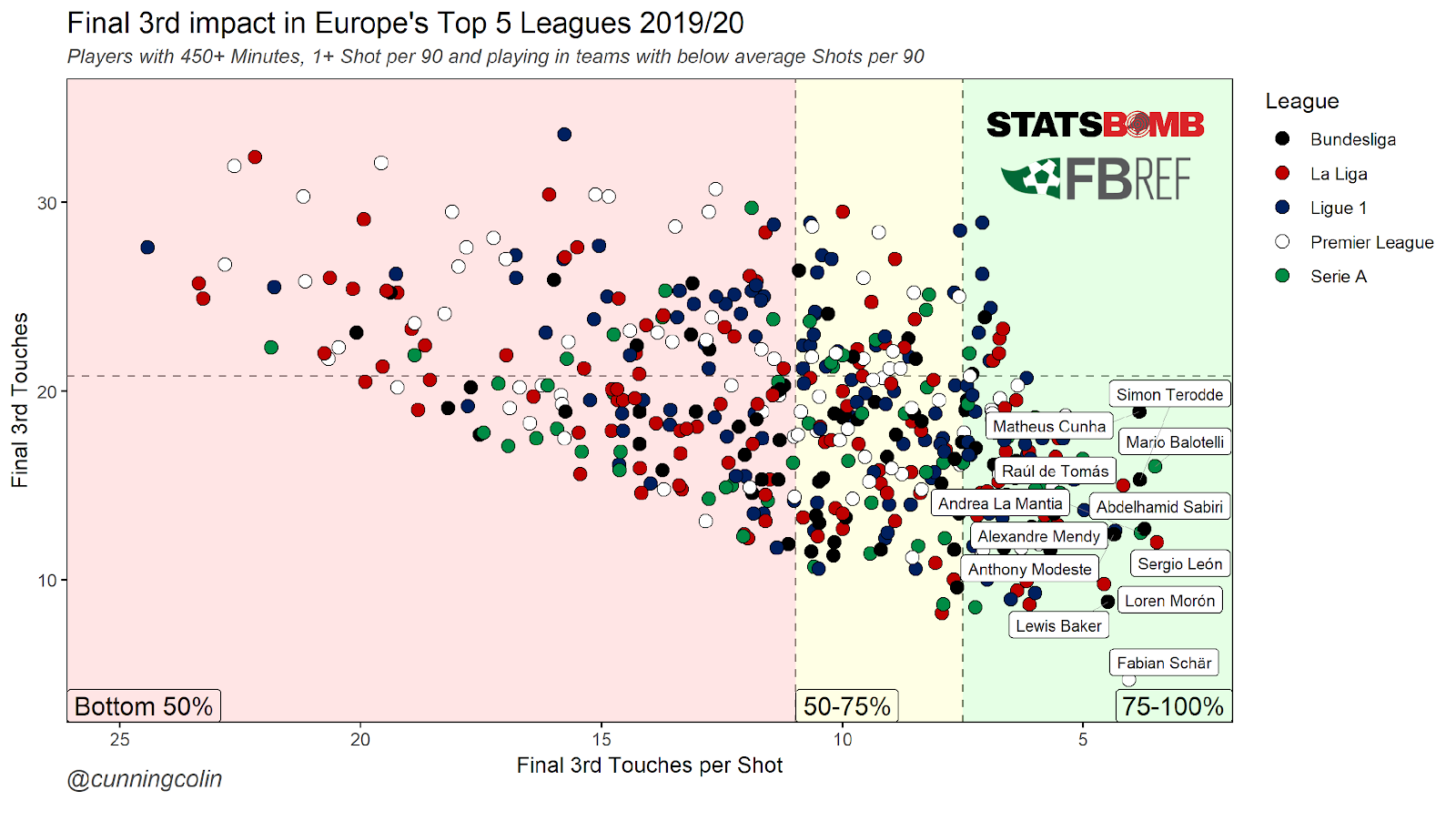 In both plots I am keen to focus on players that show up in the green areas; those that are better than at least 75% of their peers in our chosen stats. It is important to note that while I’ve only plotted players on the shot-shy teams, the percentiles are in relation to players from all 98 clubs.

At this point it would be sensible to filter these lists down in terms of your club’s recruitment strategy. For argument’s sake I am going to say that I have been tasked with finding attackers that are 23 or under and are valued at £10m or less (according to Transfermarkt). A number of exciting, highly-sought names – such as Moussa Dembele, Martin Ødegaard and Victor Osimhen – are removed and I am left with: 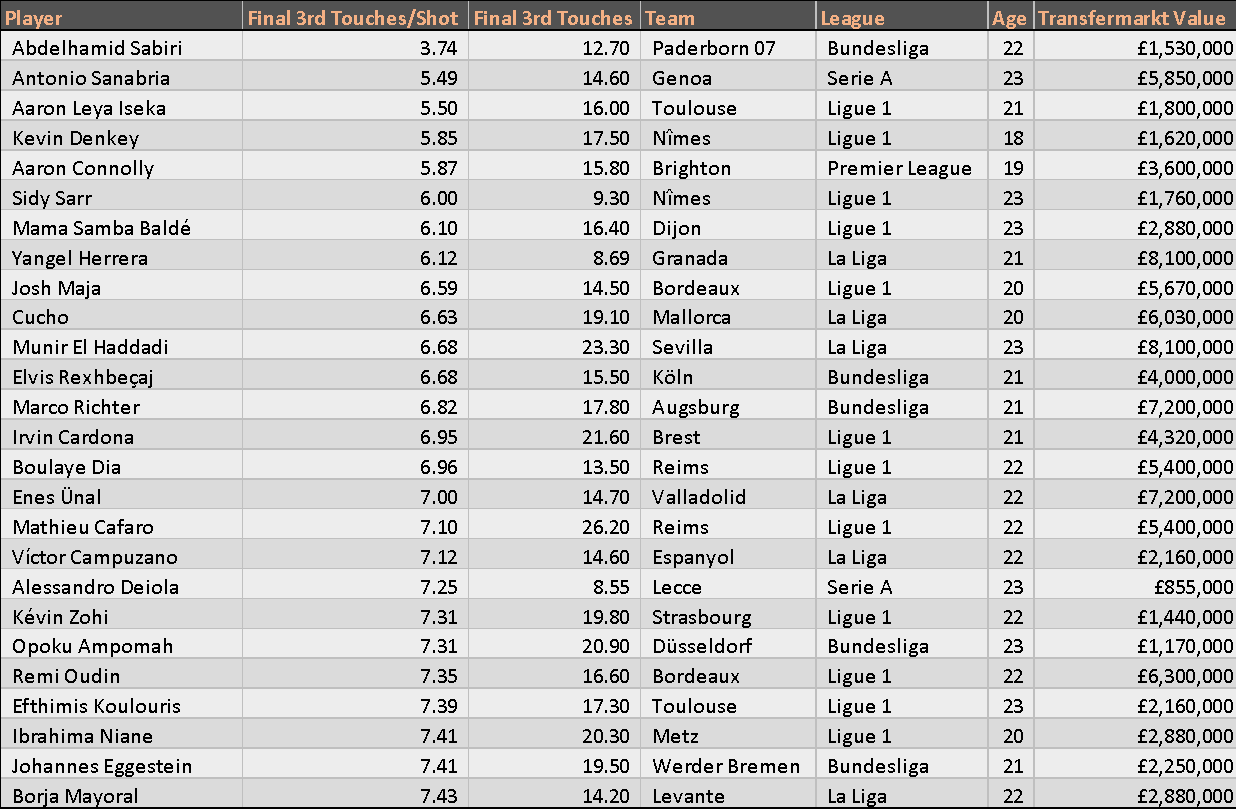 You may want to do more data digging on all the names listed, but the ones that jump out at me initially are Josh Maja, Irvin Cardona, Borja Mayoral and Aaron Leya Iseka as they appear on both lists. The latter could be a cheap pick-up since Toulouse were relegated to Ligue 2, but running their full data through the position bar-chart templates the two eye-catching ones are Maja and Cardona. 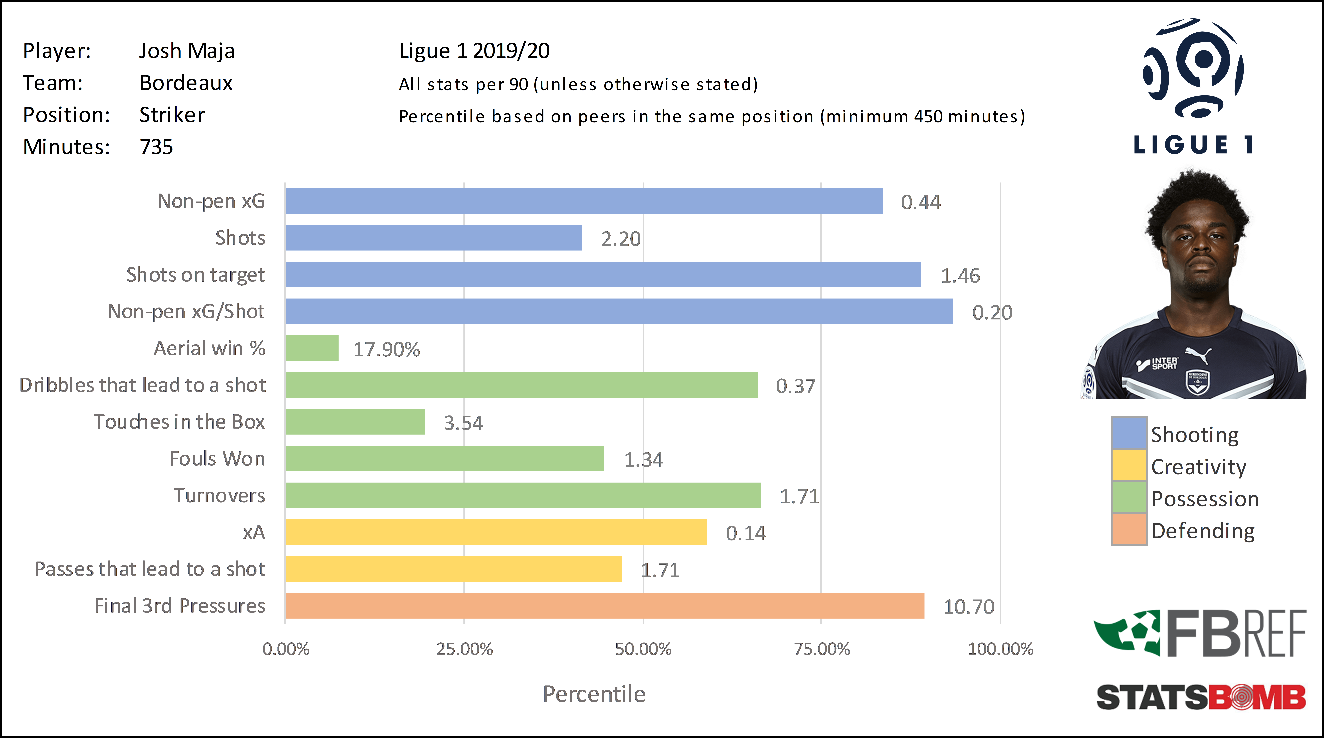 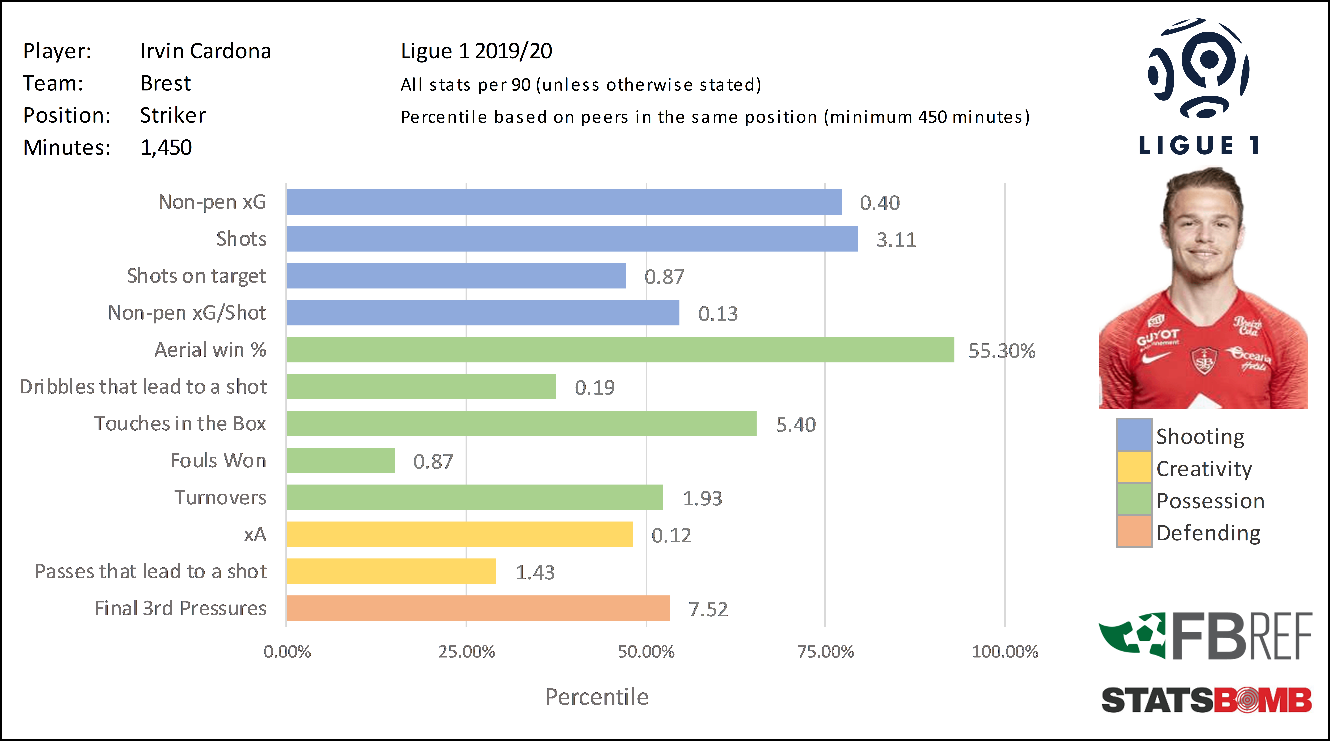 Fans of the infamous Netflix football documentary will be no stranger to Josh Maja and Irvin Cardona gained social media fame recently with a spectacular volley. Both players look impressive at a Top 5 level, even if they are quite different in terms of style.

Another player on the list that grabbed my attention is El Bilal Toure. At just 18 and in his first season in Ligue 1 he had the best npxG/Shot in our sample and is above average in several other useful stats for a striker (albeit a small sample of minutes). 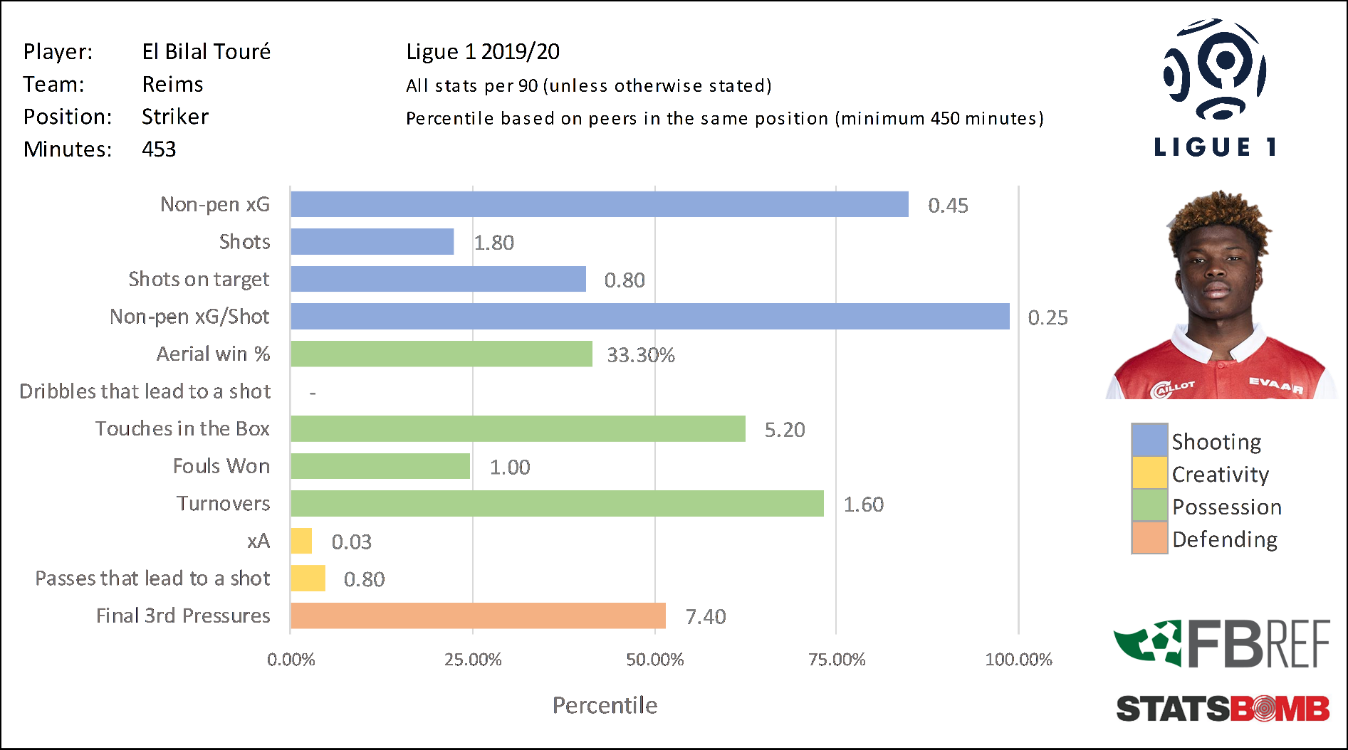 At this point it would be prudent to bring in the scout(s) to do some video analysis on the shortlist. I am keen to stress that this is not currently one of my skills; this article is about showing how data can help us zone in on players that are potentially underappreciated. I have identified players with useful attributes that stand out in the data such as their ability to get on the end of shots, but the eye test will be the real evaluator. Do these players have good movement that gets them into these high-value shooting positions and do they have the finishing technique to take advantage of this?

Adjusting Assist metrics per touch/key pass instead of per 90

Having found potentially undervalued strikers by adjusting their shot metrics the same logic can be applied to creative players. Substitute expected goals for expected assists and shots for key passes and we have two new metrics to use on the same dataset of players in low-output attacks. 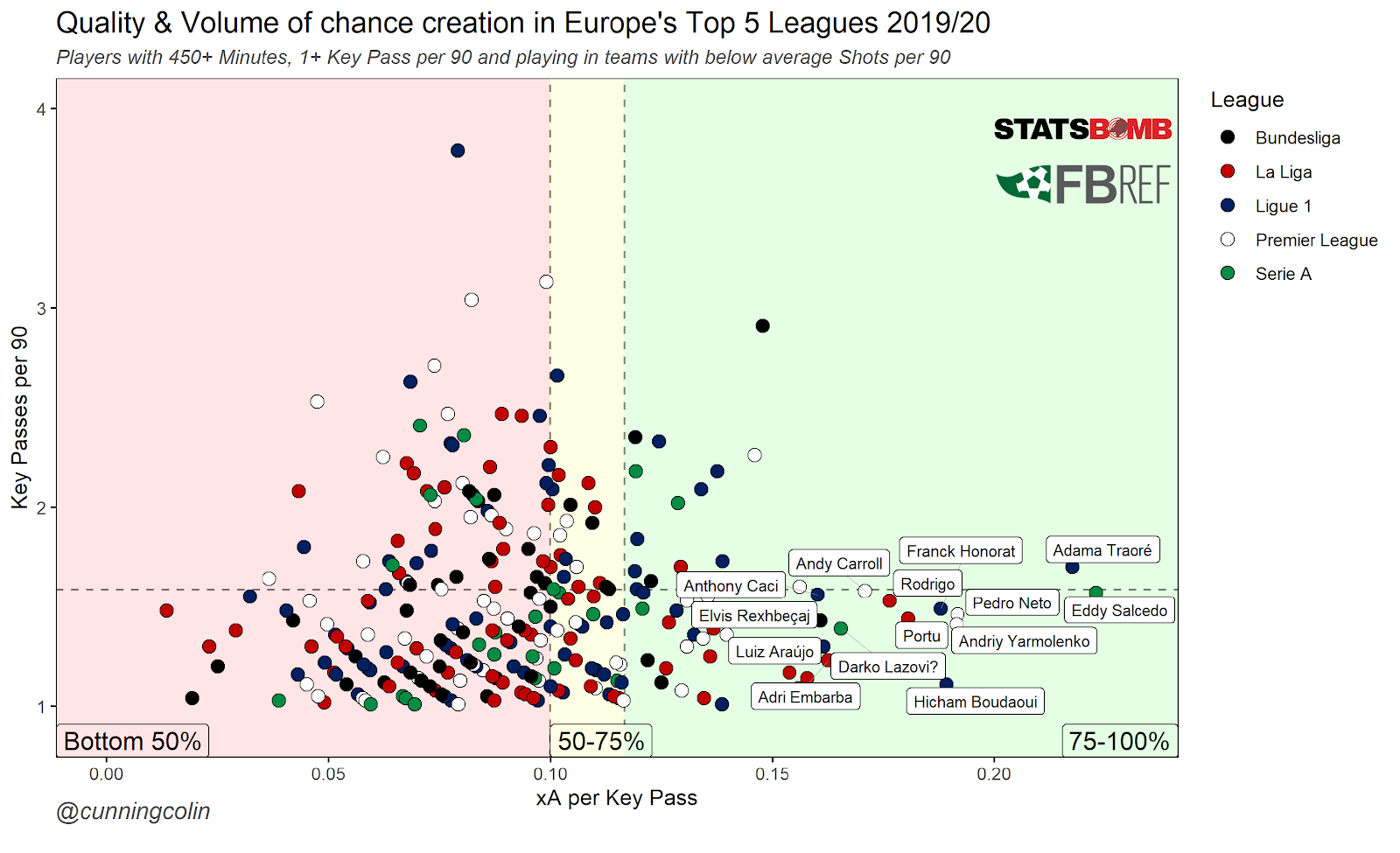 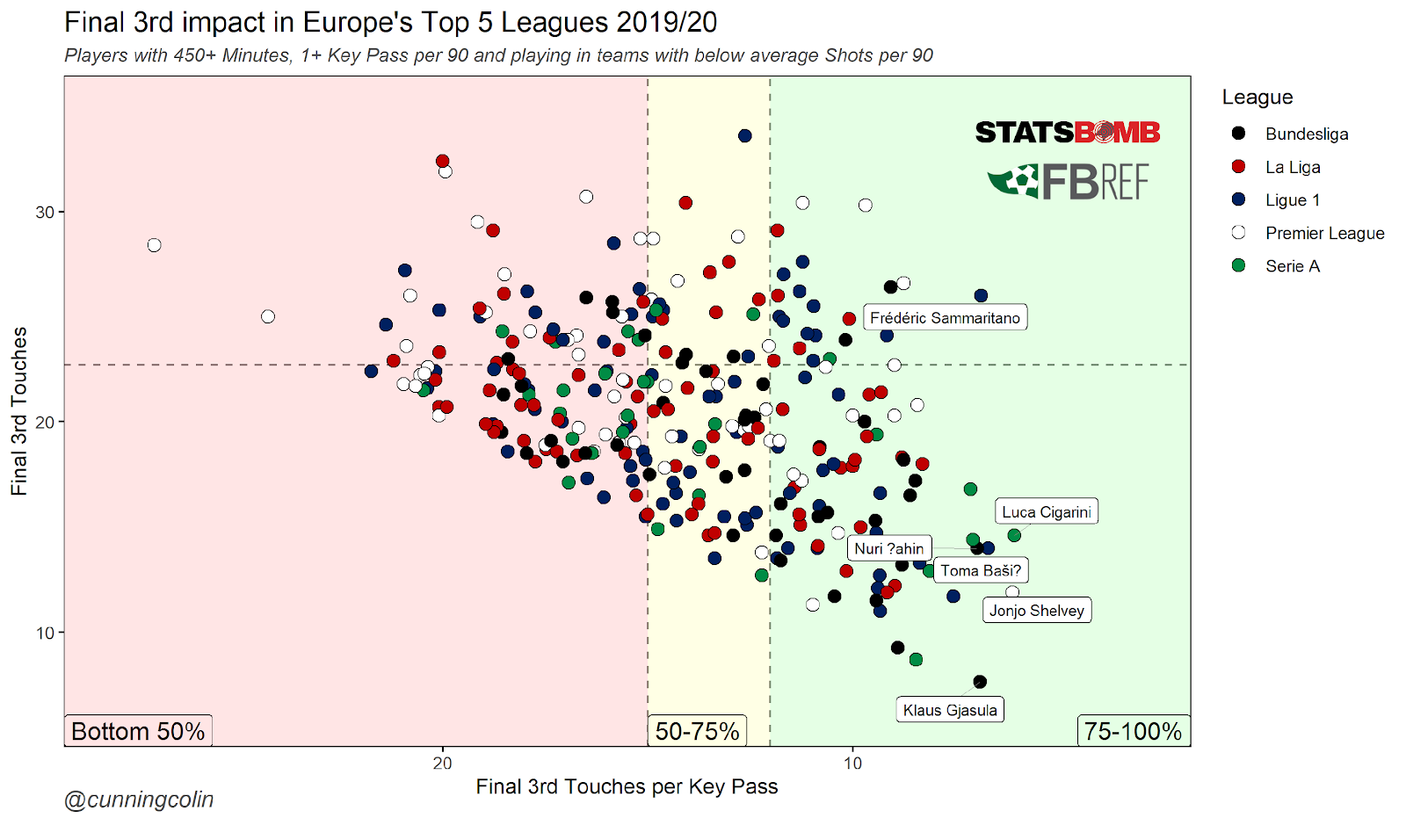 Repeating the process of filtering on young, cheapish players we lose the big names – such as Ferran Torres, Mikel Oyarzabal and Dejan Kulusekvski – and are left with the following:

As before there are a few players who appear on both lists who I will investigate first. Despite some impressive numbers I am going to skip over Elvis Rexhbeçaj because he only just made the cut for minutes and Anthony Caci because he is a fullback – his attacking stats are definitely interesting but I would like to focus on midfielders and forwards.

Interestingly I am left with another two Bordeaux players. Toma Basic is top of this subset for Key Passes per 90 whilst still maintaining a decent quality on the shots that these passes lead to, despite spending a lot of his playing time in deeper positions in 19/20. Remarkably his 0.55 Through Balls per 90 puts him 10th in Europe, marginally behind the stellar names of Marco Verratti and David Silva. That was his 2nd season in France having made 60 appearances in the Croatian top flight. 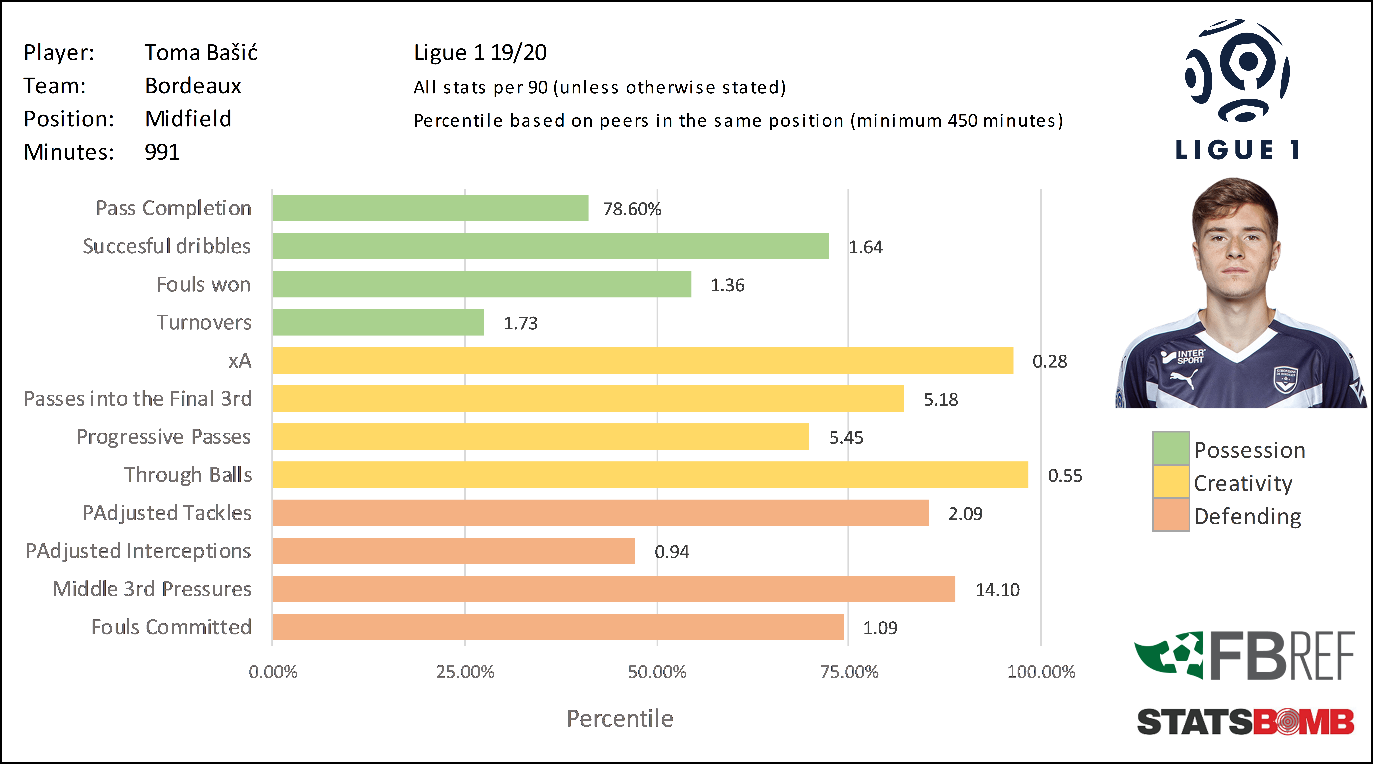 Yacine Adli occupies more advanced positions and as a result gets more touches in the opposition third. Last season he did almost everything you would want from a midfielder and his poor turnover rate can probably be explained as being a high risk-reward type. He is another player from the famed PSG production line and I am keen to see if can become a more established member of Les Girondins this year. 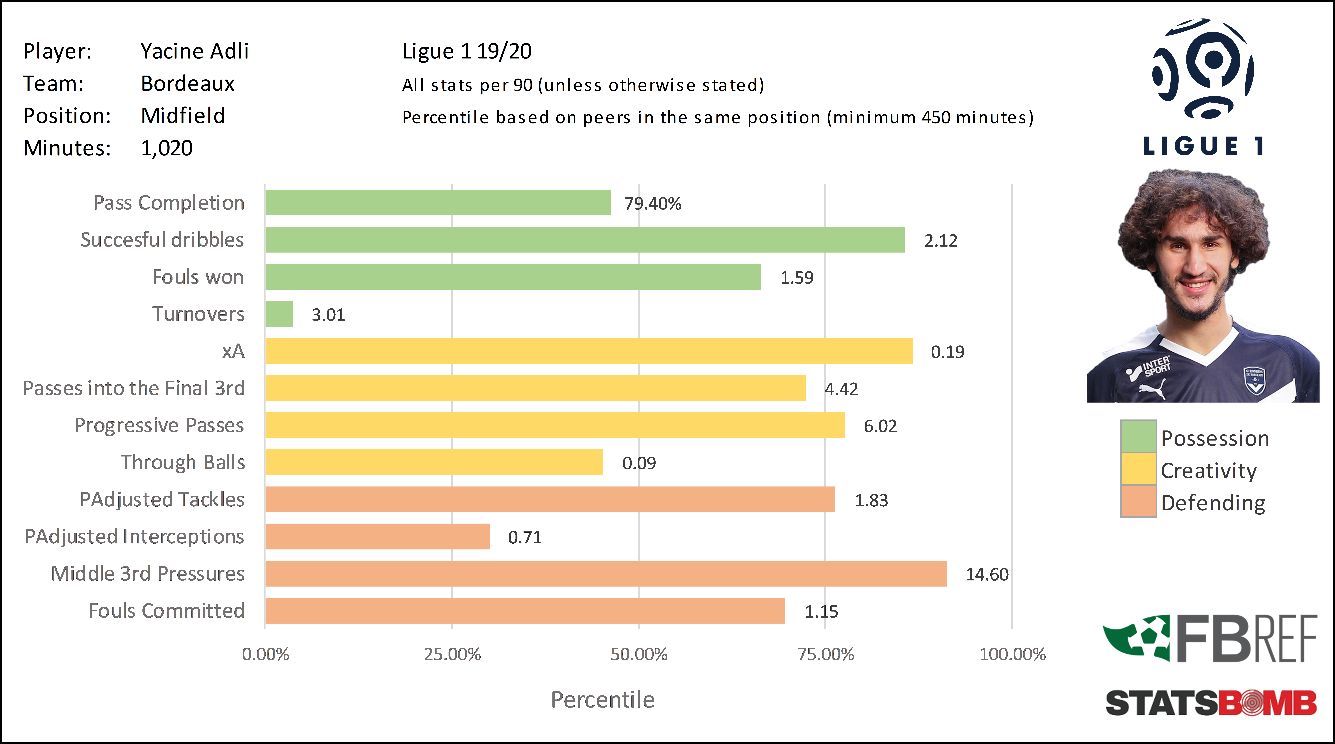 Again, it would be a good point to start the traditional scouting process on these two players. The data suggests that they use the ball efficiently despite being on teams that do not take a high number of shots. Video would show how they were able to create high value shots for their teammates, if it is repeatable and if they can flourish in a more ambitious team.

Player contribution as a % of his team’s output

A final method that I find interesting is looking at a player’s output as a percentage of his team’s total. It can be easy to write off somebody with a npxG figure around 6 for a full season as not being up to much, but what if they were in a team that only generated 30npxG? That would put them on 20% of their club’s tally and you could again make the case that in a more attacking side they would rack up more shots. A similar argument can also be made for a player that creates a high proportion of his team’s shooting chances. 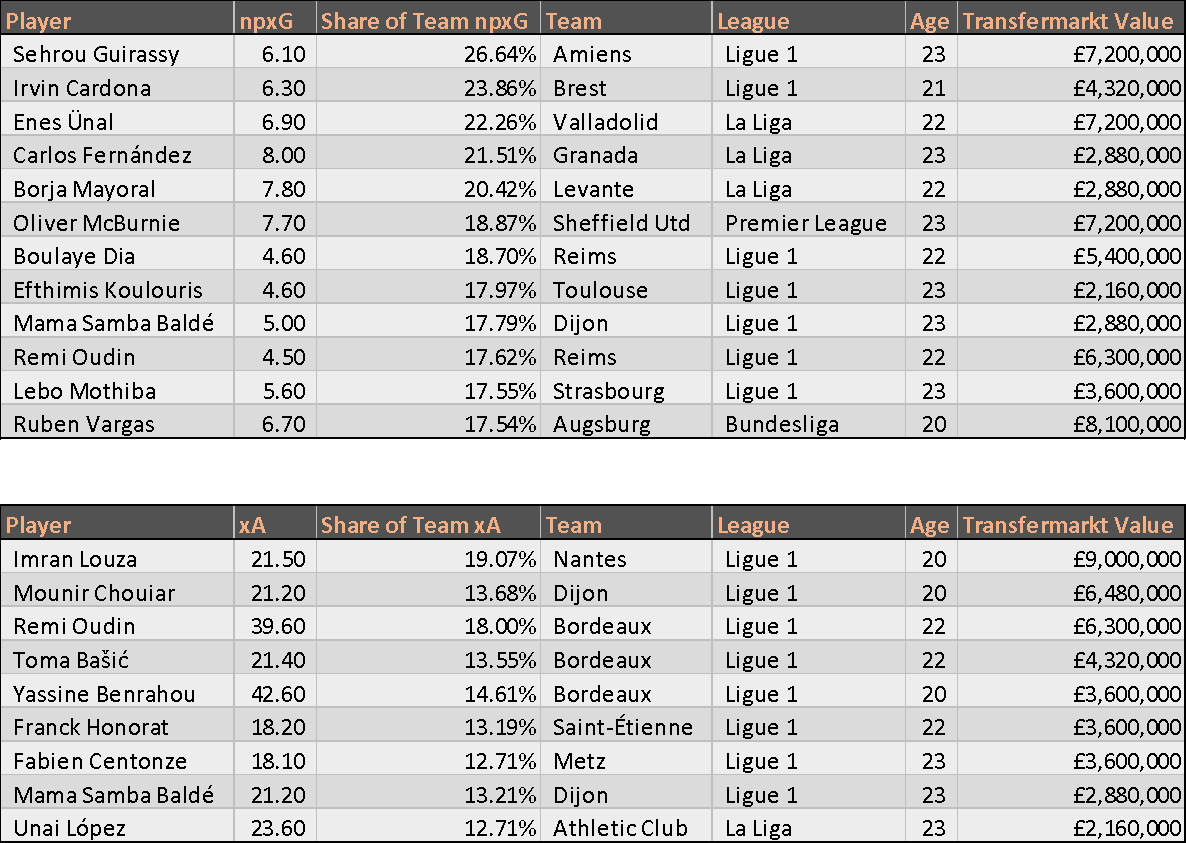 Since we are totalling npxG rather than adjusting per 90 we end up with a lot new names from before which is largely players with a significant amount of minutes – although it is reassuring to see our men Cardona and Basic appearing again. This can be an underrated aspect of identifying players, especially young ones. Playing time is massive for development and being selected consistently shows an element of trust. It can also show players that avoid significant injuries. 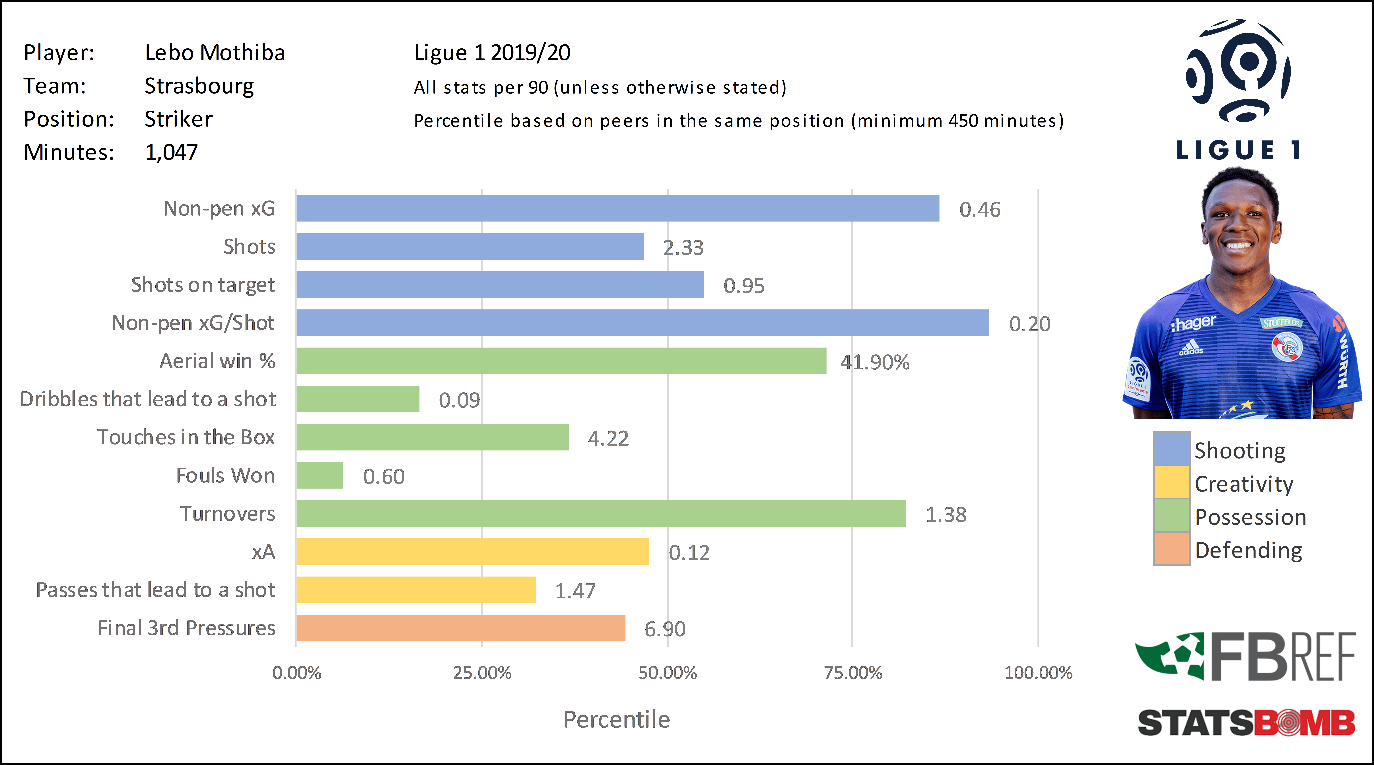 He may only have registered 1,047 minutes in 19/20 but Mathiba has over 4,200 in his last two and a half seasons in Ligue 1 – scoring 18 – and he has already cemented his place as an international for South Africa. His shot quality is impressive and the low turnover rate combined with the high aerial % suggest someone who is comfortable with retaining the ball and bringing others into play. 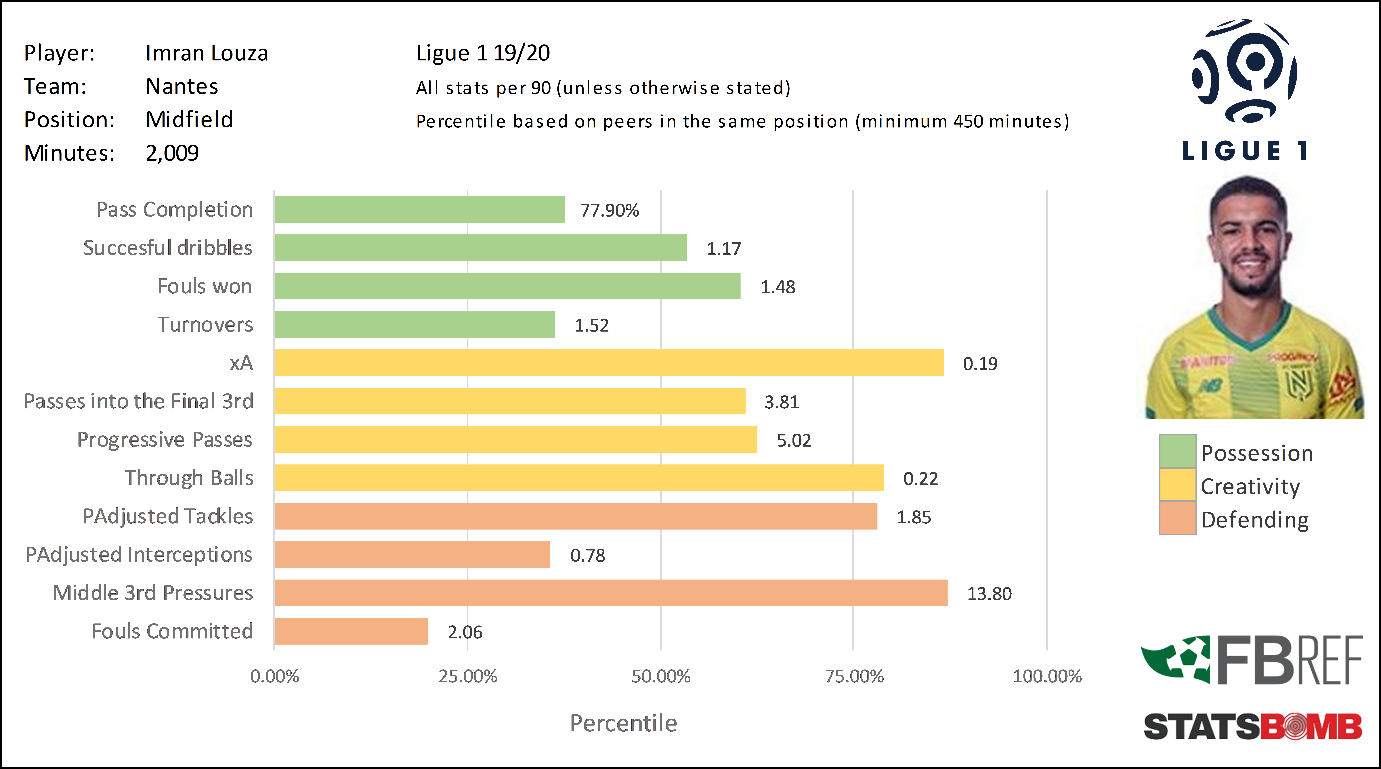 Louza played a fair amount of minutes as a 10 for Nantes last season but was also utilised as a CM and DM at times. He possesses similar creative traits to Basic and his performances last season saw him capped 6 times for an incredibly talented France U21.

These methods can obviously be expanded on for different attributes and the list of names I have pulled is clearly not an exhaustive search. I have only produced visualisations for players that piqued my curiosity but it would be wise to explore anyone who made the criteria as the eye test will most likely spot things that the data cannot. The dummy recruitment criteria I applied has clearly impacted the sample too – Ligue 1 has a lot of young talent at affordable prices and is a league I am very enthusiastic about this season.