There are a whole lot of factors that can determine what a smart price to pay for a footballer is. The general reaction to Everton’s purchase of Richarlison seems to suggest that most think they’ve significantly overpaid.

Richarlison last scored a goal for Watford on November 19th, 2017.

Richarlison last provided an assist for Watford on December 12th, 2017.

Ultimately, the smartest price to pay is as little as you can get away with. However, there’s a lot to consider in general and also specifically about this deal. Firstly, the price wasn’t actually £50 million – it was officially undisclosed but thought to be around £40 million with some additional future fee clauses based on performance. Secondly, in this case the buyer’s manager, Marco Silva, has already worked with the player and speaks the same language. This clearly reduces the attached risk. Thirdly, some aspects of the player’s underlying performance statistics indicate that although he did have a long period of no goals or assists he is likely, particularly with a much needed rest and pre-season this summer, to improve his output if he keeps developing in the same way. Finally, there aren’t many other options that fit the profile of what Everton need that are available to them at a lesser price. 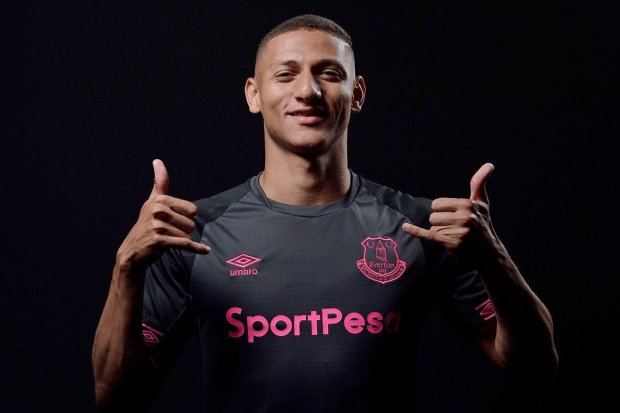 Richarlison on signing for Everton, July 2018

Let’s look at how Everton performed last season and what that suggested they needed, what they get by buying Richarlison and what some other options might have been. The final section is also relevant for other clubs as the young, goal scoring wide forward transfer merry-go-round seems to have swung into action with Barcelona stealing Malcom from under Roman noses, Europe’s giants hovering vulture like around Bayer Leverkusen’s Leon Bailey and Brighton picking up the Eredivisie’s top scorer Alireza Jahanbakhsh for around £17 million.

Everton spent £127 million on transfer fees for new players in the summer of 2017. This was partly funded by the £75 million they received for Romelu Lukaku but many football analysts were not convinced by the incoming moves. The team won only three of their first thirteen games in the 2017/18 English Premier League and Sam Allardyce was appointed to replace Ronald Koeman in an attempt to save their season from turning into an absolute disaster. They managed an undefeated run of seven matches late in 2017 before spending a further £41.5 million in the winter transfer window. A reasonable run, in terms of results, from March onwards meant that they eventually finished in eight position. To understand why they dispensed with Allardyce at that point and why they might need a player like Richarlison, even at the price they have paid, let’s take a look at some of the detail underlying that 2017/18 performance.

Despite finishing eighth of the twenty Premier League teams Everton only scored the joint eleventh most goals and they conceded the joint sixth most goals. In terms of non penalty xG – they were only the thirteenth highest for and they were the sixth highest against. So it seems that, at least when viewed over the course of the season, they may have been a bit fortunate to finish as high as they managed to. There’s some interesting further detail; 55% of the goals they managed to score came in the last thirty minutes of a match and, at home, they had the joint fifth lowest non penalty xG for. In fact, although they had a fairly decent average xG per open play shot of 0.10 they only managed 258 open play shots in the whole season. This is 6.8 per match whereas their city rivals Liverpool managed 13.7 shots from open play per match. Once set pieces are added in Everton managed just 9.4 shots per game which was the second lowest in the league and they made just 7 key passes every 90 minutes which was third lowest in the league. When Everton did manage to make opportunities they were overwhelmingly from central areas – 78% of their shots came from the middle which was the highest percentage in the league. Clearly, they had a bit of a struggle making chances particularly at home and in the earlier stages of matches and they were not shooting often from wide areas.

Interestingly, 48% of the goals Everton conceded in the league season came in the last fifteen minutes of either half. In addition they were quite susceptible to pace as they conceded shots with an average xG of 0.20 against fast attacks as opposed to an average of 0.10 against a normal speed attack. Finally, Everton made 16.2 unsuccessful touches every 90 minutes which was the most in the league and made the second highest amount of inaccurate long passes. It could be concluded that, as well as desperately needing some quality defensive players and to do something about the bloated nature of their squad Everton needed a dynamic wide attacker who could score and create as well as being a good outlet able to keep the opposition on the back foot throughout the full 90 minutes. Add in the fact that 19% of Everton’s goals came as a result of penalties or free kicks to the stat which shows that Richarlison was the most fouled player in the league last season and the move is starting to look pretty smart.

As well as considering the underlying performance numbers of last season I believe that Everton, when recruiting this summer, need to also think about what I believe is an impending age crisis. Their average squad age is 26.6 but of the seventeen players that played over 900 league minutes last season 88% are aged either 21 and younger or 28 and older. Only Michael Keane and Cenk Tosun are aged between 22 and 27. In my view they are sleepwalking towards a point where they have very few key players in the peak age range and lots of players on the decline whom they will find difficult to sell on at all and certainly won’t make any significant resale revenue from. Given this they should be recruiting relatively young players about to enter their peak and, if forced to recruit even younger, a player with top level experience would obviously be desirable.

The diagram above shows combined non penalty xG per 90 minutes and xA per 90 minutes – a snapshot of what sort of potential goal contribution a player is providing – and below is more detailed information about each Everton attacker.

Using these stats we can see how Richarlison’s underlying performance last season compared to that of Everton’s other attackers. In my view Everton should try and retain Ademola Lookman (caveat here that the numbers for him above are from very limited minutes), put Oumar Niasse’s stats down to game state and aim to move him on, expect a decent season from Theo Walcott but prepare for an impending age related decline particularly in relation to quantity of key passes, try and sell Kevin Mirallas and Yannick Bolasie (very difficult due to his age, injury history and the wages he is on) and keep Sandro only if he would be content to act as a squad player. I feel that they are sort of stuck with Tosun given how recently he arrived but he needs to find a way to get more shots off.

As the diagram shows although Richarlison only scored five goals he had a non penalty xG tally of 10.66 so based on the chances he was getting he should have scored double. It is fair to say he made some bad misses but given his age, the high number of minutes he had racked up with barely a break after his move from Brazil to Watford and the turmoil caused by the departure of Marco Silva it is possible he will score at a better rate this coming season. 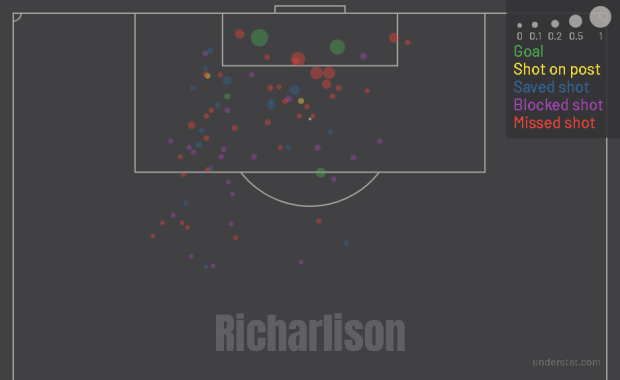 His average xG per open play shot of 0.11 (Mo Salah 0.18, Wilf Zaha 0.15, Harry Kane 0.14 for context) and his shot location map shown above do indicate that he could benefit from coaching in this area. Although taking 3.02 shots every 90 minutes is impressive (remember that’s almost half as many as the whole Everton team took per 90 minutes last season!) there are a cluster of blocked (purple dot) and missed (red dot) shots outside and just inside the penalty box on the left hand side. Everton might also hope for some more chance creation from Richarlison than his 0.83 key passes per 90 minutes suggest he is likely to provide.

Putting aside options such as Anthony Martial, Memphis Depay, Ante Rebic and Leon Bailey which I consider slightly out of reach for almost all non Champions League clubs here is a list of some other young ‘top 5 leagues’ wingers/wide forwards/centre forwards who can play wide that could have also been considered by Everton or might be suitable for a club looking for a similar profile of player.

Some other individuals for Everton and other similar clubs to consider, if willing to look outwith the ‘top 5 leagues’, include David Neres, Hirving Lozano, Bertrand Traore, Dimitri Oberlin, Cristian Pavon, Lucas Paqueta and Giorgian de Arrascaeta.

The conclusion from considering the list of players is that recruitment at the sort of level Everton operate at is tough – they have aspirations of breaking into the English Premier League’s top six but don’t have the Champions League football or prospect of winning trophies in the short term or the star players already in their squad which would be needed to attract the sort of established high quality players in peak age range which they require to make the breakthrough. There really are no sure things available in this area of the market. Given that context, although the cost is high, it is understandable that Everton have opted for Richarlison – a young talented player with experience of the league, known and trusted by their manager, with many of the attributes which analysis of the club’s performance last season indicates they need and underlying performance statistics which show, based on the opportunities he was getting for himself, he should have scored double the amount of goals that he did.